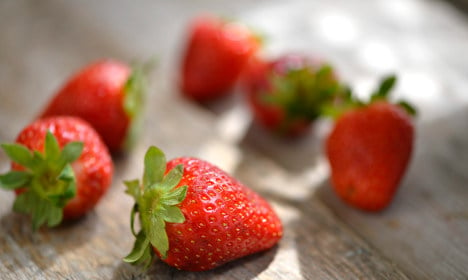 These are not the strawberries mentioned in the story. Photo: Anders Wiklund/TT

Thousands of boxes of the juicy offerings – or 3,420 litres, which is how Swedes measure strawberries – were taken from Vinslöv in the early hours of the morning just a day before Swedes celebrated Midsummer, when the sweet fruits typically take centre stage.

The thieves' getaway van was found later the same day, but most of its contents had disappeared.

But on Monday police reported that close to a third of the haul had been relocated (in a no longer edible state) some 50 kilometres away in Asarum, Blekinge.

“They had been thrown by the roadside. Unfortunately we could not return them to the owner in the state they were in,” police press spokesperson Kim Hild told Swedish news wire TT.

Sweden is currently experiencing a strawberry shortage, with reports that there might not be enough of the red treats to go round.

“The farmers have done what they can. This is their livelihood and they do not want to fail.”

Hagberg said that the disappointing yield was down to the cold weather this spring.

“In order to produce enough strawberries in time after the cold spring, the temperature would have had to have been at 25 degrees during the day and 15 degrees at night for the past two weeks,” said Hagberg. “And it has been far from that.”

Sweden’s weather was much chillier than average last month, with temperatures edging above 20C on just three days in Skåne in the south of the country. Kristianstad recorded a high of 21.4C, its lowest peak temperature in May since 1962.