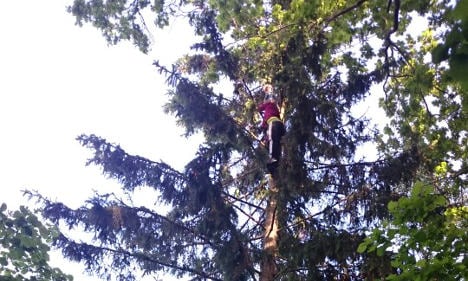 Liza Krohn rescuing her son. Photo: Räddningstjänsten Habo
Liza Krohn, 36, was called to the tree by friends of her son, who had been playing with Cazper in the forest near their home in Bankeryd in southern Sweden.
She told The Local that she immediately “climbed up very fast without thinking”, despite a long-standing fear of heights.
“He had gone up a long way and was quite scared, so I had to do it because he couldn't get down himself,” she explained.
“I sat there and held him and then realised I couldn't actually carry him back down and he couldn't do it alone because he might slip, as he was only wearing Crocs slippers.”
While Cazper calmed down and soon found it “exciting” that his mum had joined him in the tree, Krohn said she was “terrified” and quickly instructed his nine-year-old friend to call 112, Sweden's emergency number. Liza Krohn with Cazper. Photo: Private
She told the older boy where he could find her phone inside the house and then explained what he should say to call centre staff, before later sending him to wave at the arriving firefighters, who she and Cazper spotted approaching from their high vantage point in the tree.
“The firefighters were very calm and put a ladder up and helped us down. There was one guy I knew because he lives in the area and it was nice to hear a voice that I recognized – he knew I was very afraid of heights. They were the real heroes. I loved them, they were so nice to us.”
The operation took place on Midsummer's Day in Sweden, hitting the Swedish media on Monday.
Krohn told The Local that her son did not appear to have been traumatized by the incident.
“A few hours afterwards I was a bit upset and he just turned to me and said 'mummy, this will get funny later' which was actually a very funny thing to say for a five-year-old.”