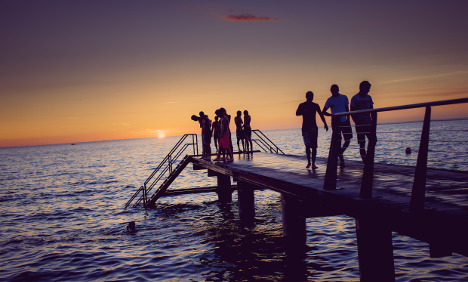 A midnight swim in Sweden. Photo. Werner Nystrand/Image Bank Sweden
Witnessing a rare moment of small talk on Stockholm's subway on Monday morning, I overheard two Swedish women discussing their Midsummer weekends.
One had been to stay at a relative's summer house, in the north of the country.
“It was maybe 23 degrees in Norrland, I think,” she said.
“But it was a bit muggy and the sun came up so early I couldn't sleep.”
“Shame. It was hard to sleep here in Stockholm too,” said the other. “But at least you missed the rain.”
The pair fell back into a relaxed silence as the surrounding passengers remained glued to their smartphones.
I was baffled. Hadn't someone just used the words 23 degrees and Norrland in the same sentence? Surely this was a cause to jump for joy?
DON'T MISS: 'Swedes make wonderful friends but terrible strangers'
Just four months ago the snow was so deep that our northern Sweden reporter's car got buried and he had to dig it up. In the dark. Last December I reported on a school in Umeå that was introducing light therapy to help students struggling to concentrate due to the short, gloomy days. Had these commuting Swedes somehow blocked the winter from their minds?
Wasn't the whole point of people bolting the major cities over the weekend and heading to the countryside supposed to be about celebrating Midsummer and the longest days of the year? Some parts of the country had sunlight for more than 20 hours on Friday. That's more than Stockholm got during the whole of November. 3pm in Stockholm during the darkest November in history. Photo: Maddy Savage
READ ALSO: May weather wettest in Sweden since 1962
Still bemused, I asked a Swedish colleague about her fellow citizens lamenting the recent light surge.
“Ah yes, that is something I like to complain about too,” she said.
“It is more difficult to drop off if it's light outside. Or it's annoying if something else wakes you up and then it's harder than usual to get back to sleep.”
She's right. It is annoying. This is my first full summer in Sweden and I am starting to understand why one of my French expat friends has been banging on about buying new blackout blinds since about February, after experiencing a sleepless summer in the Swedish capital last year.
I've walked into conversations where both Swedes and immigrants have been debating the best eye masks with more vigour than when rowing about Stockholm's acute housing crisis. I've spotted neighbours hanging rows of extra blankets above their windows in an attempt to block out the sun.
Yes, it's dramatically light at this time of year, just as it's dramatically dark in the winter. But in my opinion this is just a small price to pay for experiencing some of the most magical moments that living in the Nordics has to offer. The sun setting at around 10pm in Solna, Stockholm earlier this month. Photo: Maddy Savage
A week ago I went for a picnic in Stockholm after work on a Friday night. It was warm enough to wear a T-shirt until 9pm and we sat on a rock for another 90 minutes watching the sun go down while a group of teenagers took a dip in a nearby lake.
Over Midsummer I had a kind invitation to Åland (the Swedish-speaking islands between Sweden and Finland) and have since spent the past few days telling anyone who will listen how excited I was when the clock turned midnight and the sky was still pale.
When I woke up at 5.45am this morning (after failing to prevent the sneaky sun spilling into my apartment), I could do nothing but smile. It's amazing discovering you've got a whole extra cosy hour in bed before your alarm goes off.
And as for feeling 'muggy' at 23C? After the coldest and wettest May in decades in large parts of the country, I'm embracing every moment I start to feel sticky on the subway or have to subject Stockholm to my pale legs because it's finally so warm I can go running in shorts. I even let out a small “yay” when a friend offered me some suncream last weekend. For me, it's the smell of summer in a bottle.
As a Brit, I have absolutely no problem with Swedes' obsession with talking about the weather. It's in my DNA too. See, I've even just written almost an entire column about it.
But please, Swedish residents (and that goes for you expats and immigrants too), stop moaning about there being too much sunlight.
Stay out late. Get up early and go for a walk. Try hiking, kayaking, climbing, sailing. Have a swim if it all gets too warm for you.
Embrace Scandinavia's unique long days. Because it will be pitch black again before you know it.