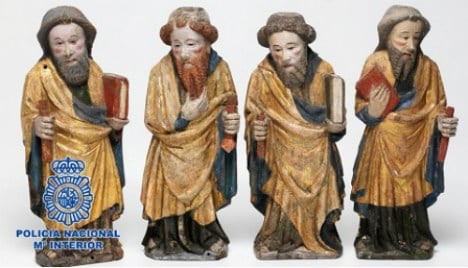 Photo: Spanish National Police
The art was allegedly stolen by a Spaniard from Swedish churches and museums.

Police seized the items — a wooden chest and 11 wooden engravings — last month on Spain's Canary Islands at the home of a 63-year-old man who they suspect stole the items in Sweden, police said in a statement.

They were among a total of 46 Swedish artworks that were found in his house which the authorities suspect were stolen.

Sweden's ambassador to Spain, Cecilia Julin, said the 12 items turned over to the Swedish embassy had been stolen from churches and local museums in central Sweden over the past two years.

Several of the wooden engravings date back to the 15th century and two Swedish police officers were in Madrid to organise the transportation of the works back to Sweden, Julin told news agency AFP.

“I think people will be celebrating in some parts of central Sweden. It is a fantastic story. Sometimes justice is done,” she said.

“It is not possible to put a price on the items.”

Swedish police officers had tipped off Spanish police that the man was the prime suspect in their probe into the art thefts.