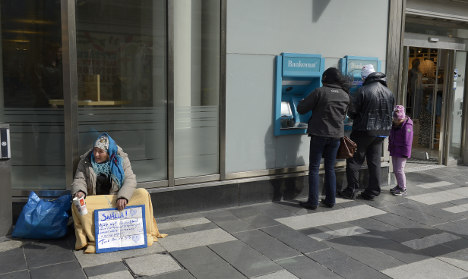 A beggar in Stockholm. Photo: Hasse Holmberg/TT
Sweden's Justice and Migration Minister Morgan Johansson announced on Wednesday that the government was looking into a new law that would ban people from profiting from beggars, similar to current legislation designed to punish those who pimp out prostitutes.
“It is currently not forbidden to make money from someone else's begging – there is a gap,” the minister told Swedish journalists at a press briefing.
He ruled out a more general ban that would prevent vulnerable citizens from asking for money on Sweden's streets, but added that there were three things that the government was not prepared to accept: “If the people begging are being used or exploited, if hundreds of spontaneous camps spring up on public, private or municipal land and if there is harrassment or violence towards those who are asking for money.”
READ ALSO: Meet Northern Sweden's frozen Roma beggars
Johansson was joined at the news conference by Alice Bah Kuhnke, Sweden's Minister for Culture and Democracy, and Åsa Regnér, Minister for Children, the Elderly and Gender Equality.
Regnér added that Romania, where the majority of beggars in Sweden come from, should also take responsibility for the swelling numbers of EU migrants on Scandinavian streets.
“We have signed an agreement that focuses on children's and women's rights and welfare development. What we'll do now is put together a working group from both countries to meet after the summer. After that we will come out with a very concrete action plan,” she said.
“It's a bad situation. No one should have to beg.” The ministers announcing their plans on Wednesday. Photo: Hasse Holmberg/TT
Leading centre right opposition politicians have previously called on the government to make it illegal for people to ask for money on Sweden's streets and called for municipalities to have the right to clear the camps where thousands of EU migrants are settling.
Sweden has seen a surge in begging in recent years, with a study in April suggesting that around 4,000 vulnerable EU migrants are now living in the Nordic nation, with many of them sleeping rough on the country's streets.
There have been multiple reports in the Swedish media suggesting that the rise in beggars is due to Roma people being trafficked to Scandinavia.
But last week a report from Scandinavian social research foundation Fafo concluded that there was no evidence to suggest that Romanian beggars in Sweden, Denmark or Norway are managed by organized criminal groups.