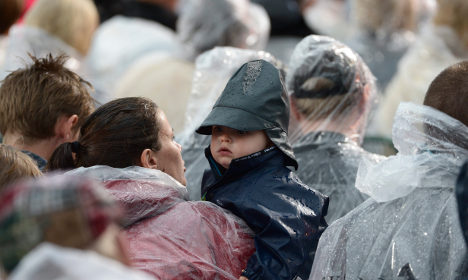 Sweden's summer has not been the best yet. Photo: Jonas Ekströmer/TT

Parts of Sweden enjoyed a mini heatwave earlier in June, but the bulk of the Nordic summer has left many disappointed.

There is good news ahead though. Next week temperatures are set to edge above 25C, according to meteorologists at the Storm weather institute.

“From Tuesday next week it will be pretty decent. Particularly on Wednesday we will get real summer weather,” Johan Groth told the Kvällsposten tabloid.

FORECAST: What's the weather going to be like where you are?

The positive prediction comes after the country experienced its wettest May in decades, a soaked Midsummer's Eve put a dampner on many revellers' joy, and a strawberry shortage brought on by the lack of sun spelled “disaster” for farmers. Last month, temperatures rose above 20C on just three days, with Kristianstad in Skåne recording the country's high of 21.4C, its lowest peak in May since 1962.

“The weather has been miserable, especially in the south of Sweden,” said Groth.

After the darkest winter on record, Swedes are likely to take full advantage of next week's warmer temperatures, perhaps by going to one of Stockholm's ten unmissable outdoor bars or hiking along Sweden's High Coast.

But Groth has warned people not to make any plans just yet.

“You should be aware that summer weather is often tricky. Things can change very fast,” he said.