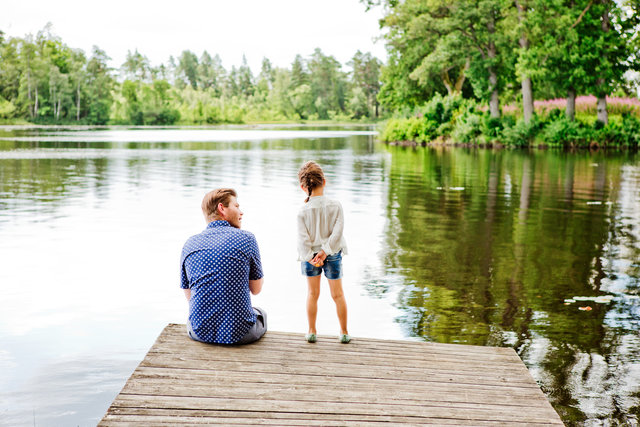 These phrases will help you navigate Sweden in the summer. Photo: Lina Roos/imagebank.sweden.se
1. Let's meet at 3pm, after work (Träffas klockan 15:00, efter jobbet)
Yes, you read that right, plenty of people working in Sweden clock off at 3pm or 4pm during the summer months, with some companies even formally implementing 'summertime hours'. After a light-starved winter, many Swedish employers understand why staff want to embrace the sunshine and long days at this time of year.

Unfortunately not every company offers this kind of deal, so if yours doesn't, be prepared for frustrating afternoons when no one you're trying to do business with picks up their work phone, while your personal mobile keeps buzzing with messages inviting you for a beer in the sunshine. Schools also typically break up for ten weeks. Yes, ten weeks.

A Swedish workplace. Photo: Simon Paulin/imagebank.sweden.se
2. It's too light (Det är alltför ljust)
With the sun setting at around 10pm in the south of the country and even later in the north, if at all, Sweden experiences some of the longest daylight hours anywhere on the planet at this time of year. But while many Swedes embrace the chance to spend their evenings in the great outdoors, be prepared to also hear plenty of chit chat about people being woken up too early by the sun, blackout blinds failing, or where to buy the best eye masks. A light night in the Swedish countryside. Photo: Patrik Svedberg/Image Bank Sweden
3. Where did all these people come from? (Varifrån kom alla dessa människor?)
If you live in a Swedish city, that quiet local park or lake where you sometimes take an evening stroll to clear your head or sip on your morning latte is about to get packed, if it hasn't already. While Swedes have a reputation for being somewhat solitary, once the sun comes out you'll regularly spot gatherings of 20 or 30 people meeting for picnics or barbecues way into the night. People playing in the park. Photo: Werner Nystrand/Folio/imagebank.sweden.se
4. I'm off on holiday. I'll be back in a month (Jag är på semester. Jag kommer att komma tillbaka om en månad)
Swedish companies offer some of the most generous annual leave in the world, with most employers offering between five and eight weeks' paid holiday a year. Swedes are often creatures of habit and tend to take three or four weeks off in a row between Midsummer's Day and the end of July. So chances are if you're not getting out-of-office replies from clients who've clocked off early, you'll be receiving messages asking you to contact them again in a month. Two Swedes relaxing in the open waters.  Photo: Alexander Hall/imagebank.sweden.se
5. Where's your summer house? (Var ligger din sommarstuga?)
While in many countries second homes are reserved for the rich, properties in the Swedish countryside are surprisingly cheap and certainly much more affordable than homes in the nation's major cities.

The country has more than 700,000 summer houses for its almost ten million inhabitants, which means it shouldn't be too difficult to find a friend to put you up for the weekend. The number of foreigners who own summer houses in Sweden has doubled since 2000, with Danes, Germans and Norwegians taking the lead in purchasing a Swedish sommarstuga for their families. A Swedish summer house. Photo: Doris Beling/Folio/imagebank.sweden.se
6. There's a strawberry shortage! (Det råder jordgubbsbrist!)
Strawberries are one of the most popular fruits in Sweden and Swedes believe they produce the best in the world. The cold spring climate followed by long summer days is believed to pack in extra sweetness and flavour.
The berries play a role in numerous Swedish desserts and are sold at special stalls all over the country during the summer, and on strawberry farms where many families travel to pick their own each year. The fruits are highly popular, which often sparks fears that there might not be enough to go round. Swedish strawberries. Photo: Carolina Romare/Image Bank Sweden
7. Shall we meet for a beer on Monday night? (Ska vi ta en öl på måndag kväll?)
During the winter you can sometimes be hard pressed to get Swedish friends to leave their apartments at weekends, let alone on a weeknight. Trudging through the snow in subzero temperatures in order to buy a drink in one of the most expensive countries in Europe when it comes to alcohol is rarely a tempting prospect and midweek boozing remains something of a taboo in health conscious Sweden. But everything changes once the sun shows its face and the days get longer. Locally brewed beer in Skåne, southern Sweden. Photo: Janus Langhorn/Image Bank Sweden
8. Fancy a dip during our lunch break? (Ska vi ta ett dopp på vår lunchrast?)
The warmer weather also means that instead of huddling around the kitchen table discussing box sets and warming up leftover meatballs at lunchtime, Swedish residents are much more likely to head outdoors. In a nation obsessed by swimming, don't be surprised if your colleagues invite you to take a splash at a nearby lake or seaside spot. A swim in Dalarna in central Sweden. Photo: Johan Willner/Image Bank Sweden
9. Come and meet my other friends! (Kom och träffa mina andra vänner)
It can take a while to get to know Swedes, although once the ice has been broken, we're convinced they're some of the warmest people on the planet. But shy Swedish people can be hesitant about mixing different friendship groups, thanks to a deep rooted fear of making anyone feel uncomfortable or awkward. Those worries tend to fade away during the summer months though, when those barbecues, picnics and swimming sessions lead to plenty more mingling in the sunshine.

A Swedish barbeque. Photo: Susanne Walström/imagebank.sweden.se
10. I miss lighting candles (Jag saknar att tända ljus)
Swedes make it through the long, dark winters by making their apartments cosy with rugs, cushions and plenty of candles and it's not uncommon to overhear Swedish residents bemoaning the fact that their living rooms feel less homely without the soft light of flickering flames during the summer.