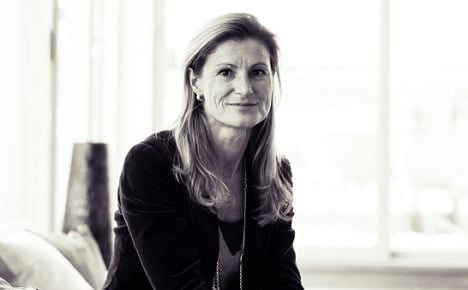 French woman Isabelle Ducellier has lived in Sweden for six years, and loves it.

“Sweden is all about harmony,” she says. “That sounds a bit weird, but that is exactly the word that came to my mind. In Stockholm I feel in harmony with the city, with nature, with my colleagues, and with my family.”

But that doesn’t mean she doesn’t see room for improvement:

“Sweden is not at the heart of business strategy,” she says bluntly. “And it should be.”

Ducellier, who learned Swedish during her first stunt here from 1997 to 2002, moved back to Stockholm in 2008 when Pernod Ricard acquired Swedish state-owned company V&S, the spirits factory behind the likes of Absolut Vodka.

“We don’t want to change the image of Absolut,” she says. “We want it remain rooted here. We buy something like 25 percent of all wheat production in Skåne, and we use Swedish water, to make it pure, different.”

The expatriate life always comes with challenges – particularly when you’re a French brand manager adopting a Swedish ex-monopoly and trying to maintain its unique identity despite culture clashes.

Pernod Ricard is a French group Ducellier describes as “all about entrepreneurship” – a stark contrast to the Swedish ex-monopoly.

“Sweden looks like home, so you believe it will be pretty European. But at the end of the day, it’s extremely different,” Ducellier exclaims. “You believe people will act European, and they don’t. We didn’t understand each other.”

After six months of making the same mistakes, Ducellier asked for help.

She hired English cross-cultural business speaker Colin Moon, whose talks include “The Swedes are strange” and “Cracking the Nordic Code”. Not content with clichés, she also began buying books about cultural differences, and reading “Cultures and Organizations” by Dutch social psychologist Geert Hofstede.

“I think that all expats in the world should read it,” Ducellier remarks. “He analyzed some 70 different countries and tries to understand them via various criteria – all of which are extremely relevant for the French to understand the Swedes.” One factor analyzed, Ducellier says, is the “power distance index”, which measures the strength of hierarchy. On a scale from 1 to 100, France scored a 68 – and Sweden a 31, one of the lowest rates in the world.

“That says a lot about Swedes and the way you have to work with them,” Ducellier says.

“In France the decision is taken by the boss and then it’s implemented. If you do that in Sweden, your employees won’t say anything, but they won’t do anything either. It has to be a group decision.”

Sweden also had by far the lowest score when it came to ‘masculinity’, ranking 5, while France scored 43.

While Sweden’s high gender equality probably plays a role in that, Ducellier said that it’s not really about gender.

“Sure, as a female CEO I have never had any issues, which is nice,” she says. “But I think that it’s more about that Swedes are very open to making the left and right brains work together. They are innovative and creative.”

Today Ducellier has adopted a more Swedish-style of business leadership, and says she enjoys it – although it takes time to get the opinion of every single person involved.

“But it’s super satisfactory, because everyone is happy and you work in teams in a very constructive way.”

That type of open mindedness and cultural perspective is essential for a company as international as Pernod Ricard – which offers all of its employees the opportunity to transfer abroad.

“We have a programme called iMove, available online for every one of Pernod Ricard’s 18,000 employees,” Ducellier explains.

With iMove, employees can see all of the open positions in the world in real time, and apply for a company position anywhere.

“The key word really is diversity, not only in terms of gender, but also profile and nationality,” Ducellier says. “In the past Pernod Ricard has been driven by French financial-type males. So now we’re looking for something else, to mix in non-French, non-male, non-financial types as well.”

But the company’s international profile comes with challenges for employees as well, particularly when it comes to brands like Absolut, based in Sweden.

“People don’t know much about Sweden,” Ducellier says. “People always ask me if Geneva is a nice place to live.”

While the clichés of what people do know about Sweden – Abba, Absolut, Ikea, the welfare system – are very positive, Ducellier says the country could do more to market itself.

“If people think about visiting Lapland or the Arctic Circle, they will go to Finland,” she says. “Because Finland has been extremely good at promoting itself as the country of Santa Claus.”

And that’s not the only problem.

“There are almost no direct flights to Stockholm,” the French woman says. “You are obliged to go via London, Amsterdam, Paris or Copenhagen – one of those four European hubs. You lose about four hours doing that, so basically, people don’t visit Sweden that often.”

And with train infrastructure that Ducellier says is lagging 20 years behind – “the system doesn’t work” – air travel is critical to keep the city from crippling its business scene.

“This question needs to be taken seriously,” Ducellier says. “There is a huge competition between Copenhagen and Stockholm right now, and it is much easier to go to Copenhagen than Stockholm. I mean, it takes an hour to even get to Arlanda Airport.”

Lack of flight connectivity is a challenge not just for businesses, but also on a personal level. Ducellier has three children who live with her in Stockholm, but travel to Bordeaux, France, to see their father every eight weeks.

“It’s a hurdle each time” she says. “It takes seven hours from Stockholm to Bordeaux. It’s just mad. There are only direct flights in July and August with Norwegian Air – that’s it.”

Stockholm’s relative isolation is also an obstacle to further business development – a shame for such a fertile market, says Ducellier. The businesswoman, who is also now a member of the board of directors of Swedish underwear brand Björn Borg, says that if the world had better access to Sweden, they would find a golden marketplace waiting.

“Bankruptcy levels are low, people are very honest, there are amazing margin levels, and the profitability you can expect is extremely high,” Ducellier explains.

“It seems like a small market, just nine million people, but the GDP per capita is high and Swedes are super consumers. They have great purchasing power and they like good things.”

In short, Stockholm is a largely untapped market due to its lack of infrastructure, she says.

“Sweden is a very safe investment. Administration is light. You can establish a company in one day, just sending in the form online. Life is so easy and everything works,” Ducellier says.