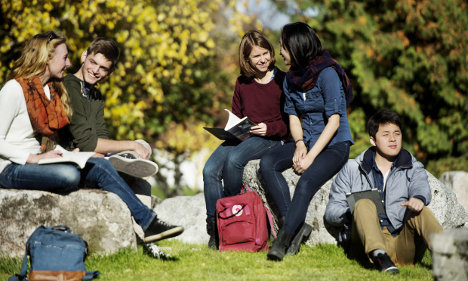 Students at Uppsala university in Sweden. Photo: Magus Liam Karlsson/Image Bank Sweden
Swedes still leave home at a much younger age than many of their European counterparts, with 21 the average age for women and just under 22 the typical age for men, according to a new report for Swedish number crunching agency Statistics Sweden.
But the research suggests that young people of both genders are moving away from their parents' homes on average six months later than they were in the early 2000s and that those living in larger cities are likely to be around a year older when they leave home than those living in the countryside.
“This may have to do with the housing shortage, but it is also because those who live in metropolitan municipalities usually have closer proximity to universities and institutes of higher education than those who live in smaller cities,” the report concluded, noting that people living in urban areas often have the option to study in their home city while living at home.
Sweden's housing crisis was a key campaign issue at the last general election and remains a hot political topic. Close to 300,000 young adults between 20 and 27 years of age neither own their own property nor have a long term rental contract.
The current accommodation shortage is particularly acute in Stockholm, where in some parts of the city there is a 20-year wait for apartment seekers. This has resulted in a strong subletting culture, with prices spiralling in recent years despite rules designed to cap rental increases.
Sweden's Social Democrat-Green government has promised to build 150,000 new homes each year from 2016.
Statistics Sweden's latest publication notes that Swedish women tend to leave their parents' homes at a slightly younger age due to moving in with a partner earlier than their male counterparts and because they are more likely than men to study rather than work straight after leaving school.
It also reveals that most young Swedes don't travel far when they get their first rental contracts, with 70 percent of those who moved away from home in 2013 remaining within the same municipality as their families.
Research for the EU's statistics agency Eurostat in 2011 suggested that just 4.1 percent of Swedes aged between 25 and 34 live with their parents, compared to 15.1 percent in the UK, around 40 percent in Spain, Portugal and Italy and an even higher proportion in Eastern Europe.
The Eurostat report concluded that Sweden's stable economy was a key factor in securing financial independence at a younger age.