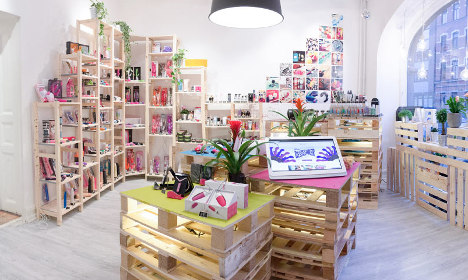 Oliver & Eva's store in Malmö. Photo: Oliver & Eva
The advert, which was posted on Arbetsförmedlingen's website for sex shop Oliver & Eva on Monday called for “driven and methodical sex toy testers” with “patience and a passion for technical equipment” to apply to the company.
It invited would-be employees who ideally had “previous experience of pleasure” to submit their CVs, stating that successful applicants would be asked to collect discreetly-packaged sex toys from their nearest post office, before testing and reviewing them. Applicants were also asked to be educated to at least high school level, to have good Swedish language levels and a basic knowledge of Excel.
But despite the text being agreed in advance with Arbetsförmedlingen, the employment agency pulled the advert on Wednesday.
“We contacted them in advance since we knew that this was a very unusual advert, so we spoke with them by email and on the phone and they even ran it past their lawyers,” Tobias Lundqvist, Oliver & Eva's founder told The Local.
The Stockholm-based entrepreneur, 31, said he was “confused and disappointed” that the agency decided to take the position off its website.
“We just got a very short message from Arbetsförmedlingen saying they had removed the advert because they have the right to take things down that might cause offence,” he said.
“Then the email said that the guy who had written it was quitting his desk for the day and would not be reachable. We were not impressed with Arbetsförmedlingen's customer service,” he laughed. Sex shop founder Tobias Lundqvist. Photo: Oliver & Eva
READ ALSO: Swedish women get new word for solo sex act
But the advert has already been good publicity for the company, having been shared more than 37,000 times on Facebook by Wednesday afternoon.
Lindqvist told The Local that at one point he was receiving one application every 20 seconds for the potentially stimulating post and had woken up on Thursday morning with 14,000 unread emails in his inbox.
He said that the firm had not yet had time to properly review the CVs it had received so far, but added that the buzz around the position meant that Oliver & Eva was now considering hiring extra testers.
“It's a perfect extra part-time gig that you can have during the summer,” he said.
“We have a diverse range of people using our site. All ages. Couples. Straight, gay and LBGT people…that really shows in the kind of people applying for the post.”
He added: “We have not had any complaints. Everyone who has contacted us just sees all this as a bit of fun.”
DON'T MISS: Why elderly Swedes enjoy an active sex life
The businessman advised those still keen on sending in their applications to highlight their technical skills.
“Some of the new sex toys use smartphone technology, so your favourite celebrity can bring you to a climax,” he said, joking that his star of choice would be Swedish singer Håkan Hellström.
Pär Netsman, a spokesperson for Arbetsförmedlingen told The Local: “We took the advert away because some people could feel that sex toys are offensive”.