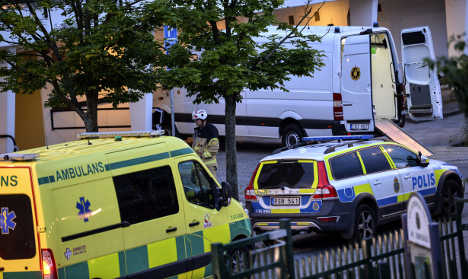 No one is thought to have been hurt by the fires, which were quickly put out by firefighters. Police said they were still investigating how they had been started.

The community building that was damaged is used as a meeting hall by local community groups including youth clubs.

Officers observed that the suburb had been rocked by the unrest, following a wave of recent violence in the area.

“The residents are so clearly troubled by everything that has happened,” Kim Hild, a spokesperson for police told the TT newswire.

Police said that they had also found a hand grenade in a garage close to where one of the cars had been burned.

Two hand grenades were thrown towards an apartment block on the same road on Midsummer’s Day last week, but none of them exploded. Residents were asked to leave the building and were to a nearby school, while police cordoned off a large area of the neighbourhood and a police bomb squad was sent in.

According to Swedish news network SVT, locals cheered as police made arrests in the area on Thursday morning.

Claes Böhmer a police team leader told the broadcaster that the evening was “probably an important point for people here on Kroksbäck.”

Malmö has experienced growing violence in recent years. Some of its inner-city areas and suburbs have a reputation for gun and gang-related crimes as well as race-related violence between different immigrant groups.

As a result, the force has recently stepped up its presence in known trouble-hit areas including Kroksbäck and Rosengård.

The availability [of weapons] is something which worries us a lot, that it really is this simple to get hold of them,” Patrik Johansson of the Malmö police told Swedish news wire TT on Monday.