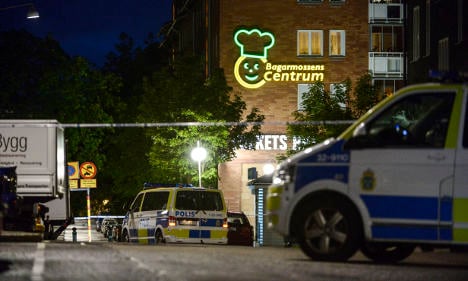 Officers were called to Bagarmossen in southern Stockholm at around 10.30pm and promptly cordoned off a residential area in the centre of the suburb, evacuating several apartment buildings.

Police bomb technicians were ordered to investigate the suspicious object which was discovered in a box placed inside a public toilet cubicle.

“Gift to the police” was spray painted on a nearby wall, with an arrow pointing to the package.

But by 4am on Thursday, bomb technicians had concluded that the object was harmless.

“We received information about a bomb from two different people and found an object,” Jens Mårtensson, duty officer at Stockholm police, told Swedish news agency TT at the start of the investigation.

“There was much to suggest that this may be some kind of joke. But we cannot dismiss it until bomb technicians have looked at it,” he added.

Witnesses in the area said the atmosphere was tense on Wednesday night, with families nervous about having to temporarily leave their homes.

Bagarmossen is a quiet suburb, with community feel and a friendly reputation. It is situated in the south of the Swedish capital, 20 minutes on the subway from the city centre.