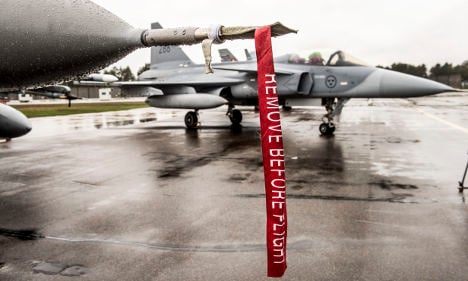 Jas Gripen planes like the one in the background are among Sweden's exports. Photo: TT

Sweden is the 11th largest weapons exporter in the world and has seen its arms exports rocket in recent years.

But numerous campaign groups have questioned whether the Nordic nation should continue doing business with some of its customers.

A report by the Stockholm International Peace Institute earlier this month noted that 52 percent of exports from Sweden went to countries where democracy and human rights have been called into question.

Now a parliamentary committee set up to review the sale of military equipment (Krigsmaterielexportöversynskommittén or KEX) has concluded that states with large democratic deficits should no longer be allowed to buy Swedish weapons.

In a debate article published Sweden’s Dagens Industri newspaper on Friday, members of the KEX committee said that they were pushing the government to introduce stricter rules on weapons sales, to develop clearer criteria on what constitutes a breach of human rights and to do more to make sure that legally exported weapons do not get transferred on to more questionable regimes in other countries.

“The worse the democratic state, the less room there should be for permission [to sell weapons] to be granted,” the committee members wrote.

“If there are serious and widespread violations of human rights or serious shortcomings in terms of democratic status, these will be obstacles to authorisation.”

The KEX report acknowledges that – if implemented – its proposals could have a major impact on Sweden’s defence industry, which employs tens of thousands of people.

But according to Swedish broadcaster SVT, both the Social Democrats and Greens that make up the current coalition government and the centre right opposition Alliance parties broadly support the suggestions in the new report. The Left Party has expressed concerns that it does not go far enough.

The committee's recommendations are expected to be debated in parliament later in the year.