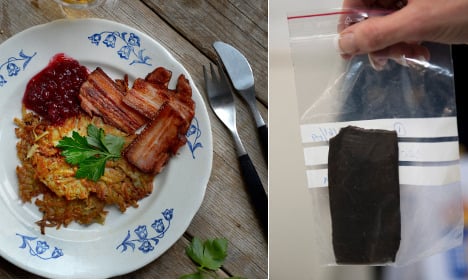 Swedes are well known for their proficiency in English. But unexpected language barriers can arise under even the best of circumstances. Stella Ivanova, 35, got a taste of this when she visited her friend Ayse Beijer, 32, in Stockholm.

The pair had just returned from Midsummer celebrations in the Stockholm archipelago when Ivanova decided to grab a bite to eat at a traditional Swedish pub in the capital's Old Town (Gamla Stan).

With its cobblestone streets, winding alleys and souvenir shops, the area is a popular hub for tourists. As a result, many of the restaurants provide an English translation of their menus. It's pretty handy. Usually.

But when the Bulgarian tourist walked into the popular Engelen restaurant and asked to try some hash browns, she was turned away with the words: “We don't do that kind of thing here, it's illegal in Sweden.”

“Stella came out furious and disappointed and I asked what had happened. She just said the waitress had told her to leave. I just said there must have been a misunderstanding,” her friend Beijar told The Local on Friday.

When Beijar, who lives in Stockholm, went back inside to find out what had happened it emerged the waitress thought Ivanova had asked for hash brownies – marijuana. The substance is classed as an illegal drug in Sweden – in other words a very far cry from hash browns, which is a traditional pan-fried shredded potato dish known in Swedish as 'rårakor'.

“My friend has travelled all over the world and speaks great English. I asked if the waitress really thought a 35-year-old woman would order drugs in the middle of Stockholm's tourist area at three o'clock in the afternoon. The thought is obviously completely crazy,” said Beijar.

However, according to her the waitress would not budge and the pair were forced to leave. Beijar said the restaurant has not been in touch with them since the incident, which was first written about by Sweden's Aftonbladet newspaper.

“We laughed but we were also really angry. Tourism is one of Sweden's biggest sources of income and we're trying to attract more visitors – and then when somebody comes here you scare them off,” she said.

The Local has not been able to reach anyone at Engelen, but restaurant site manager Annika Palmgren told Aftonbladet on Friday that there had been a misunderstanding and that the staff had felt threatened by the situation.

“Unfortunately the staff did not get that she meant 'rårakor'. (…) It was not our intention to be rude, we would have liked to sort things out. We must now make sure that everybody on the team know what the words on the menu mean,” she told the Swedish tabloid.

Feeling peckish after reading this? Try your hand at John Duxbury's recipe of Swedish hash browns (the legal kind).