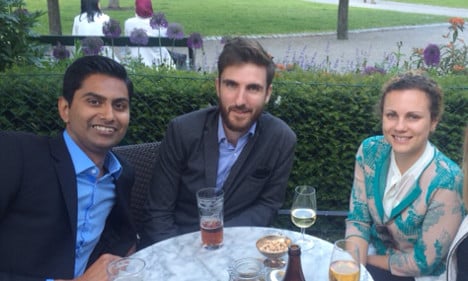 Ameek Grewal (left) with friends from his Swedish course. Photo: Private
When the opportunity to transfer from the British capital to Citibank's Nordic headquarters in Stockholm emerged in the spring of 2014, Grewal, who works as an analyst, says he grabbed it with both hands.
“People might ask why I would move from London to Stockholm, but working in a smaller office means I get more exposure to senior management,” he tells The Local.
“Having spent a while in the UK, I was ready for a change of scenery. Working abroad means you get the chance to live in and explore a new place at the same time as continuing to build a career,” he argues.
A self-confessed travel addict, Grewal previously studied in France prior to his stint in London's financial district. He's currently got a three-year working visa, although his contract with Citibank is open-ended and he hasn't ruled out staying even longer in Sweden.
“The company was implementing a new analytical structure in Sweden and I among others had the right background, so that's why I was given the choice to come here,” he explains.
“The Sweden office previously only covered – at a junior level – relationship management work. Now we also cover financial analysis as well, whereas before that was done out of London for Swedish clients. I am gaining a lot of experience.” Ameek Grewal at Citibank in Stockholm. Photo: Private
READ ALSO: Meet the Syrian asylum seeker causing a stir on the start-up scene
Grewal admits he had to quickly learn what makes Swedish clients tick and to adapt his business practices accordingly.
“You don't contact them at weekends — even via email — and you definitely should not call them after 6pm unless it is an emergency,” he says.
“It's very different to dealing with British clients who will stay in touch on weekends, weekdays, evenings – basically any time!” he laughs.
“While it can be frustrating to sometimes not get a quick email response, at the same time Swedish clients respect my time off. There is mutual respect. I know I won't be called up on my holidays.”
Althouh Grewal describes his transition into Stockholm life as “relatively smooth” and says his company did provide some administrative support after his relocation, he passionately believes that both Swedish and international firms need to do much more to assist international employees.
“There is a lot to think about, from registering with the tax authorities, to finding somewhere to live and knowing what all the different rules are. Swedes are happy to help but sometimes they don't know the answers because they haven't been through it themselves and I think because there is such a big influx of foreign workers moving here, this kind of stuff has to be a big priority.”
“Foreign workers need a specific kind of support. Even though people here speak really good English, there are certain cultural differences and processes that people who are new here might need some help getting used to.” Ameek Grewal enjoying Sweden's great outdoors. Photo: Private
Brought up in Vancouver on Canada's west coast, Grewal says Sweden feels “somehow familiar” to him because of its strong outdoor culture to a general high standard of living. But he admits he has struggled to adapt to the weather.
“I was expecting it to be similar to Canada. Even though lots of people warned me about the darkness, I didn't believe it would be that bad until I experienced it!”
Grewal says that exercise helped him through the long winter and that he's been inspired to go running more frequently by his healthy colleagues.
“I think I've run more this year than I have in my whole life! It's been a good thing because it's also been something for me to talk about with my workmates, a shared interest.”
The 29-year-old says he's also enjoyed tasting Swedish food since he moved to Stockholm, especially elk (moose) and has been entertained by new friends and workmates sharing the Nordic country's drinking songs at parties.
“That's been one of the most fascinating things to witness,” he says.
“You do get drinking songs in the UK but I've never experienced them in the family home before, which is where people really get going in Sweden. I have tried to learn a few, but there are so many!”
For more stories about international professionals working in Sweden head to The Local's jobs page, where you'll also find hundreds of vacancies for English speakers