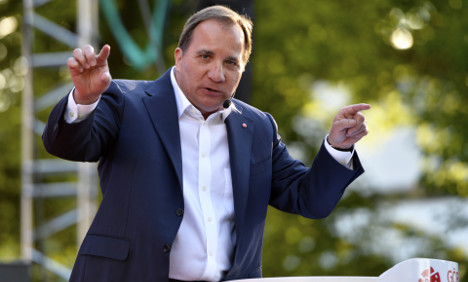 Stefan Lofven reiterated his pledge for Sweden to have the lowest jobless rate in Europe on Tuesday night as he promised to get more young people into work.

In his keynote speech at Almedalen (Sweden’s annual political conference week on the island of Gotland), the former welder argued that he wanted to improve opportunities for school leavers and to encourage Swedes to be “the best that you can be”.

He also discussed previous promises to expand training programmes to encourage more young people to enter Swedish industry and healthcare professions and said he would raise the salaries of the country's most talented teachers.

The Social Democrat leader also called on Sweden to develop its “strength in the global economy”, calling on Swedes to “join in and show that Swedish companies can astound the world”.

But he got his biggest cheers of the night when discussing tolerance and terrorism.

“If you love Sweden, stand up for everybody's liberty,” he told the crowd, scoring a spontaneous applause.

Löfven said that he wanted to reduce racism and sexual discrimination in Swedish workplaces and argued that the Islamist terror group Isis (also known as the Islamic State) could be beaten.

The Prime Minister’s speech came at a tough time for his party with several recent polls suggesting his the popularity of the Social Democrats has slipped since last September's general election.

In a major survey released by Novus for Swedish Radio's news programme Ekot on Monday, 40.9 percent of voters said they preferred the four centre-right opposition parties that make up Sweden's Alliance, while only 39.5 percent of those quizzed said they supported the Social Democrats, Green Party and Left Party. But Löfven’s efforts were warmly greeted by party supporters at Almedalen.

“The speech was anchored in debate. He tackled the problems of beggars, of Isis’s advance, but he also spoke of schools and unemployment,” he added.

“Stefan is very good when he talks about unemployment. You see that it’s close to his heart, he’s fired up by the issue. He spoke personally about our politics.” READ ALSO: Almedalen – What you need to know about Sweden's power players week

Carina Ohlsson a member of the Swedish parliament and chairwoman of Social Democrat Women’s movement told The Local:

“I thought it was a very good speech, with lots of pathos and feeling. There was a lot about jobs and education, but he also took up the situation in the world…and how Sweden needs to be a country that stands up with solidarity to take in asylum seekers. It gives a signal to all of us here listening – but also to people out in the world – that we all, together need to show solidarity.” But others criticised the Swedish leader for failing to surprise voters and sticking closely to previous speech themes and policy announcements.

“He has broken election promises and made mistakes, trust in him has fallen and the party's poll ratings have plummeted,” she noted.

Sweden's annual Almedalen conference continues on Tuesday and will run until the weekend.

The country's youngest political leader in history, Ebba Busch Thor will take to the stage on Tuesday evening, representing the smallest group in the Swedish parliament, the centre-right Christian Democrats.