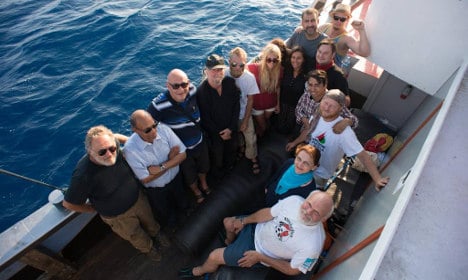 Ship to Gaza crew members on board Marianne of Gothenburg. Photo: Ship to Gaza

Most of the 18 people on board the Ship to Gaza vessel are Swedish nationals, among them writer Kajsa Ekis Ekman and activist Dror Feiler. The vessel was sailing from Gothenburg to Gaza when it was stopped by the Israeli Navy just after midnight.

A spokesman for Ship to Gaza, which aims to bring humanitarian aid to the region, said early on Monday morning that they had so far failed to establish contact with the crew.

According to Ship to Gaza, the boarding took place in international waters, 97 nautical miles from Gaza. The group was last able to contact the ship's crew at 12:57am Swedish time.

“That they're boarding us this far out on international waters shows that Israel's occupation is extending outwards. We want to underline that the blockade of Gaza is inhumane as well as a violation of international law,” Granér said.

The Israeli Defence Forces confirmed that the military had boarded the ship — called Marianne of Gothenburg — and was escorting it to the Ashdod Port in Israel, where it was expected to arrive on Monday evening.

“After exhausting all diplomatic channels, the Israeli government ordered the Israeli Navy to redirect a vessel in order to prevent a breach of the naval blockade of the Gaza Strip,” a statement on the force's website read.

“In accordance with international law, the Israeli Navy advised the vessel several times to change course. Following their refusal, forces visited and searched the vessel in international waters in order to prevent the intended breach of the maritime blockade of the Gaza Strip. The forces have reported that use of force was unnecessary, and that the process was uneventful,” added the statement.

The leader of Sweden's Left Party, Jonas Sjöstedt, issued sharp criticism of the incident on Monday.

“Israeli military has boarded Ship to Gaza's boat Marianne and arrested all on board. That's how an arrogant occupation power acts,” he wrote on Twitter.

The Ship to Gaza group hit the headlines in 2010 and 2012 when it attempted to ship in humanitarian aid from Sweden to Gaza. On both occasions 11 Swedish nationals were on board the vessels.

Famous Swedish author Henning Mankell — the creator of fictional detective Kurt Wallander — was on board the 2010 voyage when the flotilla was attacked by Israeli commandos, according to Sweden's foreign ministry.

Two years ago another voyage was brought to a halt after Israeli soldiers surrounded and boarded the vessel named Estelle.

In 2010, in the first attempt to reach Gaza by sea, a Turkish vessel in the flotilla was boarded by Israeli soldiers resulting in the death of nine activists.