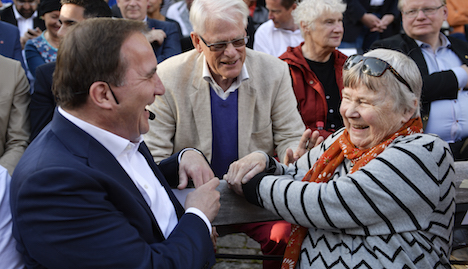 One summers day in 1968, a charismatic young Social Democratic minister called Olof Palme interrupted his holiday to give a political speech in Almedalen park in Visby, the capital of Gotland – an island in southern Sweden. His talk was delivered from the back of a truck and was written on the back of a supermarket receipt.

Today, that one improvised speech has mushroomed into a slick, choreographed event involving not just the Social Democrats, but all eight Swedish parliamentary parties. The receipt has been replaced by autocues, the truck by a stage with screens, lighting and sound-engineers. Where three journalists covered Palme in 1968, the entire media establishment has decamped to Gotland in 2015.

In 1968, local papers wrote that about 1500 people – mostly locals and passing tourists – came to listen to Palme. This year, hotel rooms and houses are rented out months in advance, fetching eye-watering prices as 25,000 people scrap over the best beds. Enterprising locals make small fortunes by putting their homes out on AirB’N’B.

Olof Palme, true to character, focused his first Almedalen speech on the big picture – the Vietnam War, the US civil rights movement and the rights of small countries.

This year, for every seminar about a big question – Greece or Russia, for instance – there are countless events that are more esoteric, or even downright eccentric.

For instance on Thursday you can hear Mormons tell you how knowing your ancestry can strengthen society. If you want something a bit more concrete, you could choose to go to a seminar about chemicals in the building trade or the role of sport in integration. All open to whoever wants to listen.

Every year you will hear Almedalen veterans complaining that the event is getting too big. You’ll be told that it has been taken over by the marketing men, the rosé-swigging PR people, and the much-maligned lobbyists. You’ll hear that it needs to shrink, to go back to its roots, drop the beachside parties and reconnect with the people.

But is that what Swedes really want? Surely the scale and variety of Almedalen is what makes it special.The fact that you might just end up passing by a talk on Baltic Sea mussel farming or the future of veteran aircraft gives everyone who comes here an astonishing chance to broaden their horizons.

You might even argue that the free exchange of ideas that Almedalen represents is part of the reason that Sweden continues to top league tables on everything from competitiveness to happiness. There have been attempts to copy it in Scandinavia – and reportedly also in South Korea. Really, more places should give it a go.

After all, being exposed to new ideas is surely essential to the brand of pragmatic politics that is credited with Sweden’s success. Hopefully the media presence means readers and listeners around the world can be inspired by that too.

Check out The Local's live blogs, news stories and analysis in our special Almedalen 2015 section