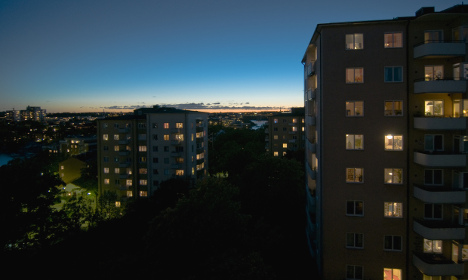 It’s 8:30pm in Stockholm’s Old Town, Gamla Stan, and the cobbled streets are packed with tourists and locals sampling the island’s many restaurants and bars.

It was at this time on the evening of February 28th 1986 that the then Swedish Prime Minister Olof Palme and his wife Lisbeth entered Gamla Stan subway station. They planned to take a train to a cinema just a few stops away.

In just a few hours, he would be dead, and Sweden would launch one of the biggest murder investigations of all time.

Tonight, I’m in a cab hired for the slightly ghoulish experience of tracking the last movements of some of the victims of Stockholm’s most shocking crimes.

But this is no ordinary crime tour. I’ll be observing each scene with the help of an iPad fitted with GPS positioning as my guide.

Launched by Taxi Stockholm this week, the creepy ride is just one of the tours on offer as part of the cab company's Explore Stockholm initiative.

It's designed to appeal to appeal to fans of Nordic Noir and, undoubtedly, also to users of the rival car-sharing service, Uber, which has recently been eroding the business of regular cabs.

Whichever firm you use, taxis never come cheap in Stockholm. But at 950 kronor ($113), this tour is not one to be undertaken lightly. So, can it offer a suitably scary experience for Noir-loving tourists? The taxi pulls away from Gamla Stan subway station. We leave Palme and his wife to catch their train (we’ll be joining them later) and head for the Normalm district, which is home to some of Sweden’s biggest designer stores.

Time to fast-forward almost 20 years to the afternoon of September 11th 2003, when Swedish Foreign Minister Anna Lindh and her friend arrived in the area to do some clothes shopping.

As they passed some of the more exclusive shops, Lindh pointed out some of the telephone-number prices to her friend and laughed.

In the end, they both entered Nordiska Kompaniet, one of Sweden’s flashiest department stores, where the Foreign Minister hoped to find a smart jacket to wear for a televised debate later that evening. The subject was the referendum about Sweden’s adoption of the euro, so she knew the programme would be watched by millions.

But she would never make it. Suddenly, as Lindh’s friend watched in horror, the minister was pushed into a clothes rail and stabbed in the chest, abdomen and arms.

Back in my 21st century cab, I’m now driving past the store. The screen in front of me is showing the original subtitled news reports as well as interviews with witnesses. Finally there are reports on the arrest of the murderer.

Later in the tour we join the trail of Palme and his wife as they leave the Grand Cinema and walk to the spot where he will be shot – the junction between Sveavägen and Tunnelgatan.

Many of the shops have changed since then and there’s nothing but a small plaque to mark the place where he died.

The original footage, however, brings the crime scene into sharp focus, in a way that no walking tour could quite match.

Palme’s assassin was never found, but my iPad guide offers several theories about his death – including the possibility of a link with another crime on the tour.

From an international perspective, the murders of Lindh and Palme are the most notorious Swedish crimes of recent years, but the other crimes included on my drive round Stockholm are just as intriguing.

You’ve no doubt heard of ‘Stockholm syndrome’ – but did you know about the crime that led to the coining of the term? Now you can draw up at the former bank where hostages in a siege showed sympathy for their captors – and were later immortalised in the phrase.

Our final stop is a rather unremarkable building: a former cash depo in Västberga, in the south of the city, where robbers used a helicopter to carry out a spectacular theft in 2009. The only remaining trace of the crime is a metal fence at the top of the building, installed to prevent helicopters from landing.

The tour ends. I've had an unexpectedly enjoyable and informative ride. Whether many will want to spend so much time in a taxi during Stockholm's current heatwave is another matter – but the dark and cold winter months will certainly help create the right atmosphere.

As I leave the car, I reflect on the very safe, peaceful city where I’ve lived for the past few years. It hasn’t made me more wary, but it’s ensured that I’ll never view Stockholm in quite the same light again.

The crime tour was launched by Taxi Stockholm as part of Explore Stockholm.