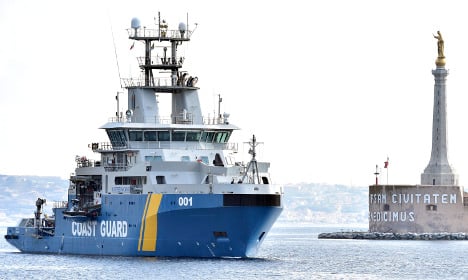 The migrants are believed to have been at sea for between 12 and 24 hours but officials said that they appeared to be in relatively good health.

Mattias Lindholm, a press officer for the Swedish coast guard told the TT news agency that  the rescue mission had been “calm and collected” and that those with immediately obvious minor injuries had been quickly treated.

Poseidon's mission is to save the lives of migrants trying to get to Europe. It arrived in the Mediterranean earlier this month as part of operation Triton, the EU's border rescue operation.

In an interview with Swedish Radio ahead of the mission, commander Peo Allard said that the Swedes on board Poseidon had never undertaken a task quite like this one, which had involved both specific training and mental preparation.

The Poseidon is kitted out with special equipment in order to take on a large number of migrants. The ship has portable toilets and private rooms for women and children. Sails have been put up to create shade for protection from the heat.

The ship has rescued around 1,650 migrants since it arrived in the Mediterranean.