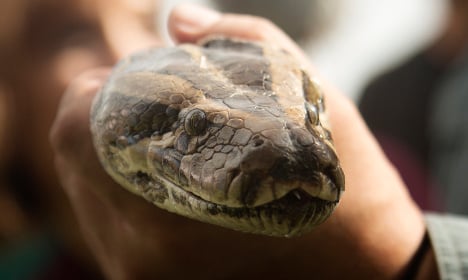 This is (probably) not the snake mentioned in the story. Photo: AP Photo/J Pat Carter

Reptile experts were called out to hunt down the slippery snake after a passerby spotted it in a pond in Pildammsparken.

But by the time they arrived on the scene the python had already slithered away and the search was eventually stood down shortly before noon.

“We've been looking in the pond and the areas around the pond, but it's like looking for a needle in a haystack,” Joakim Ljungström at Malmö Reptile Centre told southern Swedish daily Sydsvenskan.

“The snake will probably stay away until the sun goes down. It's probably hiding somewhere in the water or in the vegetation,” he added.

It is still not known from where or from whom the python escaped.

“At the moment I can't see any other explanation than that it has sneaked off from an individual owner. It happens every now and then that snakes do that, but they seldom get very far from their home environment,” Ljungström told Sydsvenskan.

“They don't move fast and they don't like to travel through open areas. My guess is that it will stick around in the park and if it moves it will be at night.”

Located in central Malmö and known for its lush willows and wide lawns, Pildammsparken is a popular park among families and children, and news of the python-at-large spread quickly on social media on Thursday.

“It's hot for two days and then Pildammsparken is turned into the Jungle Book,” wrote one Twitter user, referring to the heatwave that has hit Sweden this week.

Any snake-fearing Swedes, however, have little to worry about. Pythons have a fairly docile temper and are relatively harmless – at least to humans.

“It's nothing to be concerned about, at least not as a human. They are very reclusive and if someone does get bitten it usually happens if you try ot catch them. Any birds in the park are probably more at risk, if the snake gets hungry,” he said.