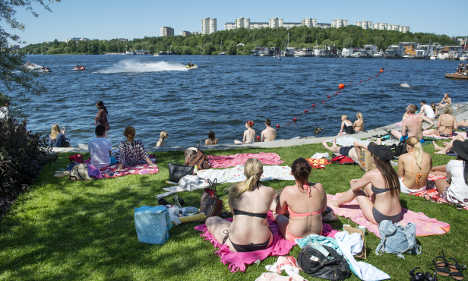 While much of Europe has spent the past month dripping in sweat, Sweden had a mild and wet start to the summer.

But this week the sunshine finally started warming up the Nordic nation, with temperatures reaching 26C in the Swedish capital and 23C on the island of Gotland, where the nation’s politics and business nerds are gathering for the annual Almedalen forum.

Forecasters say that a heatwave is on the way between now and Monday in the south east of the country – defined as when temperatures reach at least 30C on at least three consecutive days.

Check the weather forecast where you are in Sweden

Sweden’s national weather agency SMHI told the TT news agency that parts of Kalmar, Östergötland, Södermansland as well as Stockholm were set to see mercury levels rising and warned that while the sunshine could well cheer up many Swedes, it would also bring the risk of forest fires and could cause some vulnerable groups to become ill.

“We have put out a class one warning about high temperatures, mainly for certain groups in society who could feel much worse because of it [the weather]: the elderly, children and those who are already sick,” said SMHI forecaster Lisa Frost.

“But it’s the case that everyone should drink more water and stay in the shade,” she added.

Further north, southern Norrland was also expected to experience temperatures of up to 30C on Thursday on Friday, although forecasters said the heat was likely to fade away by the weekend.

While Sweden has a reputation as a chilly, snowy destination, it has the warmest climate of all the Nordic countries, with an average maximum temperature of 23C in July.

Last year a one of the largest forest fires in modern times ripped through Sala, north west of Stockholm, forcing thousands to leave their homes.

But the class one warning currently in place in southern Sweden is the lowest of three categories the SMHI lists on its website and most Swedes appeared to be excited by the hotter climate on Thursday afternoon. Thousands turned to social media to post snaps of themselves enjoying the sunshine.

IN PICTURES: Swedes soak up sunshine on hottest day of year

Wow, the sky is blue and the #heat is on. The #summer is finally in #Sweden. Enjoy your day folks! pic.twitter.com/lZY7k6uiKa

Even higher sizzling temperatures are expected elsewhere in Europe in the coming days, with Spain expected to get as hot as 44C and half of France given an orange weather warning, the second highest possible in the country.