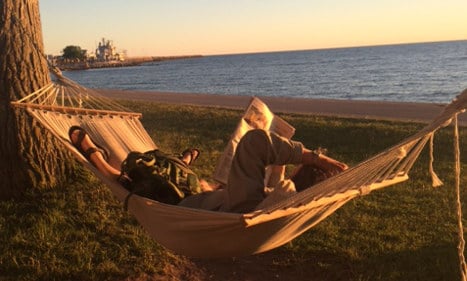 A Swede cooling off in a hammock in Visby, Sweden. Photo: The Local

1. Take your clothes off

Swedes have a global reputation for enjoying getting naked and the stereotype can be seen at parks and beaches throughout the summer. There's no shame in sunbathing in just your bikini in the city centre, and you'll see plenty of men going topless during their morning runs. Swedes love to keep fit and when the sun comes out it's time to show off all your hard work. For a country where temperatures rarely rise above 20C, Sweden has a lot of outdoor swimming spots. Its three major waterside cities – Gothenburg, Malmö and Stockholm – are all packed with wooden jetties where you can sizzle in the sunshine before making a splash. Swedes love to swim and will happily indulge in naked skinny dipping – even before it starts to get dark. 3. Chill in a summer house

While in many countries second homes are reserved for the rich, properties in the Swedish countryside are surprisingly cheap. The country has more than 700,000 summer houses (sommarstuga) for its 10 million inhabitants, which means it shouldn't be too difficult to find a friend to put you up for the weekend. You might get invited to go hiking or sailing while you're there, but on-the-go city types also love to relax in their ‘sommarstuga'. This means you might not venture far from the patio, but you'll be offered plenty of beer and grilled meat while you're there. 4. Head to an outdoor gym

Swedes also make the most of their summers by working out in parks. There are plenty of al fresco gyms around the country and outdoor yoga sessions are also becoming more common. Not into exercise? Park your towel nearby, this is prime people-watching territory! 5. Have an ice cream

Dairy products are a national obsession in Sweden from eggs to cheese and a confusingly broad range of creams and yoghurts. Come summertime, locally-made ice cream is the key milk-based snack on the menu. We've mentioned this before; work-life balance is very important to Swedes and at no time is this more obvious than during the summer. Since the days are so short this far north during winter, Swedish people want to stock up on their vitamin D once the sun comes out and many employers allow them to clock off early to do so.

Even more than ice cream, strawberries are a staple ingredient during any Swedish summer. Swedes believe they produce the best in the world. The cold spring climate followed by long summer days is believed to pack in extra sweetness and flavour. Strawberries are as easy to find as ice cream. Photo: Hasse Holmberg/TT

Rose wine is one of the most trendy summer drinks in Sweden and is a symbol that the sunny season is truly under way. It's always served up at Almedalen, Sweden's mega political conference in July and at major sporting events in July and August. Rose wine is made from lightly crushed red grapes that are set aside to macerate with their red skins. Then, juice is squeezed out from the mush and fermented in tanks. It's best served chilled or with ice. But remember to have plenty of water as well in the heat. No, we're not kidding. Plenty of Swedes still enjoy taking saunas during the summer. Since Sweden's lakes and seaside spots don't exactly boast Caribbean temperatures, it's not uncommon to sweat out your rose and grilled lunch in the evening, before taking a plunge back outside to cool off. Alternatively, after spending the day in the water, you might need a sauna to warm you up once the sun goes down. Speaking of the sun, well it doesn't go down for that long in the Nordic region, with some parts of Sweden even experiencing 24 hours of sunlight. Avoid becoming someone who moans about how this can play havoc with your sleeping patterns by investing in some decent blackout blinds or an eye mask. After all, you need to catch your beauty sleep ahead of all that sunbathing, swimming, topless jogging and strawberry feasting. Article written by Maddy Savage and first published in 2015, then updated in 2018.