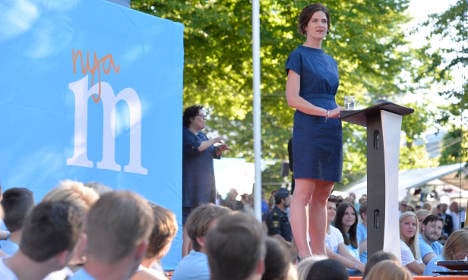 Kinberg Batra started her keynote address on the main stage at Almedalen – Sweden's most important week in politics – by speaking about Greece's imminent referendum on leaving the euro.

In front of a 2,000-people strong audience in central Visby on the island of Gotland, she criticized Greek leaders for allowing the Mediterranean country's financial crisis to grow.

“Moderates will never give up the responsibility of making Sweden a society you can trust, with state finances you can trust,” she said.

However, similarly to her biggest opponent, Prime Minister Stefan Löfven, who spoke at Almedalen on Monday, she spent most of her speech focusing on jobs.

As she had already hinted earlier in the day, the Moderate party leader said she wants to tackle social exclusion in Sweden and to help young and foreign-born people feel more integrated in society.

She won plenty of applause for a 9 billion kronor ($1 billion) proposal to help lowering taxes for those on low incomes, designed to make it easier for people to get on to the jobs market.

“We know that Sweden is full of people who have more to give. Who are able to do more. But who are still not able to get that very first job. We're going to change that. Because then Sweden will be able to do more,” she said and accused Sweden's ruling centre-left coalition of making it more expensive for companies to employ people by raising taxes.

READ ALSO: The Local's blog of day six at Almedalen

While still Sweden's biggest opposition party, the Moderates have lost support in the past year, partly to the nationalist Sweden Democrats, who scored 12.9 percent of the vote in Sweden's general election in September last year. In her speech on Friday, Kinberg Batra made an effort to outline key differences between the two parties in a bid to win back some of the support.

“There are more people who are attacking jobs from the left. One more is actually Jimmie Åkesson,” she said of the nationalist leader, who spoke on the Almedalen stage on Wednesday.

Kinberg Batra received a lot of praise from her supporters for presenting concrete policies to solve the jobs issue, however many criticized the overall performance, slamming her as monotone and boring.

This was arguably the most important speech in the new Moderate party leader's career. She has had a tough task taking over from her popular predecessor Fredrik Reinfeldt, who stepped down with approval ratings of well over 50 percent, even despite losing out to the Social Democrat-Green coalition in the September 2014 elections.

There has also been growing discord in the party over the December Agreement, a deal struck between Löfven's Social Democrats, Greens and the Alliance opposition – the Moderates, the Centre Party, the Liberal Party and the Christian Democrats – to thwart a budget crisis in late 2014.

This disagreement was visible at Almedalen on Friday, with some Moderate members of tonight's audience wearing t-shirts with the text “tear up the December Agreement”. But the protest was never more vocal than that and Kinberg Batra herself did not mention the controversial deal in her keynote speech.