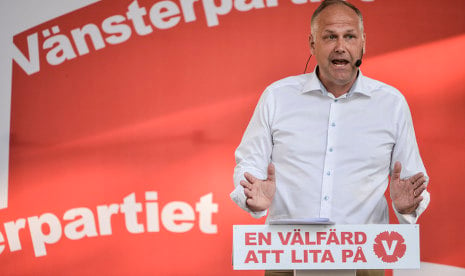 7.29pm Sjöstedt finishes with another call for national unity

“We can build something better than we have today, but we can only do it together. Thank you very much,” says the leader.

7.27pm Sjöstedt signals his support of the left-wing Greek government against its creditors

“It is not good enough to have a government that supports the European elite against the Greek democracy.”

7.23pm Time to attack the government

“We need to invest on a completely different level than we do today, otherwise we will not be able to drive down unemployment.”

“The voters for the Social Democratic and Green parties voted red-green because they wanted change. But on several issues the government does not dare to act.”

7.19pm There are things to be proud of

“There are things that we can be proud of. Our maternity policies are rightly set as an example for other parts of the world.”

7.17pm A swipe at the Sweden Democrats

“The other day Jimmie Åkesson talked about a policy for children. But we know very well which children counted and which children did not count in his policy,” he says, referring to the nationalist Sweden Democrat leader's speech on Wednesday.

Sjöstedt is talking about child poverty.

He has moved on to the issue summer aid, the policy he mentioned earlier in the day and outlined below, that sets out to ensure that all children, especially those in poorer areas, should have the opportunity for summer activities that are paid for by the state.

“It's a special feeling when you come back to school to talk about your summer holidays. No one should have to lie about their summer. It is not at all unrealistic, but it requires a well-directed policy.”

“Welcome all lobbyists from health companies – I am afraid that you are wasting your time, but welcome anyway,” says Mr Sjöstedt.

With that barb at lobbyists he embarks on a theme on wanting a more inclusive society.

“We are getting used to seeing the gaps in society. We seem to be OK with it as long as our nests are feathered.”

The money should be spent on children between the ages of six and 15 to enjoy activities such as holiday camps, football schools and activities at sea, he has suggested.

“Children who may otherwise be home alone while parents work will have something to talk about when they go back to school.”

The money should go to the municipalities with the poorest families. The requirement should be that the activities are free of charge and be aimed at both boys and girls, he has argued.

“We want to bring to generate the money by reintroducing the wealth tax, which would give about four billion kroner to the Treasury. The tax for the richest was abolished in 2007. I think it's a nice thought that Sweden's richest give Sweden's poorest kids a nice summer vacation,” he said. Ulla Andersson, the Left Party’s economic policy spokeswoman, has said that she is not satisfied with the Government's efforts to achieve the lowest unemployment in the EU in 2020.

“We need policies that push down unemployment while providing extra welfare. You have to set a goal – you have to dare to invest,” she said.

“We have a train system that does not work; we need to invest more in public transport and we need more employees in welfare.”

Andersson said she would increase tax on those who earn more than 30,000 kroner a month.

“Should we favour those with much money or ensure that our children receive a good upbringing?”

As its name suggests, the Left Party is the most left-wing group in the Swedish parliament. It has a long history and described itself as communist until the 1990s.

The Left Party has never served in government but usually offers informal support to Social Democrat governments whenever they are in power.

The party is against the privatization of public companies and supports higher taxes to fund Sweden's welfare state.

Born in Gothenburg, its leader Jonas Sjöstedt is a former metal worker who has also worked in Strasbourg and Brussels as a member of the European Parliament and in New York where he wrote for left-wing magazines and newspapers. He has been a member of the Swedish parliament since 2010.

Good morning and welcome to our live blog of the seventh day of Almedalen Week.

Sweden's Left Party is in the spotlight on Saturday, with leader Jonas Sjöstedt set to take the stage for his speech at 7pm tonight. Yesterday he accused Sweden's Social Democrats and Greens of abandoning their left-wing ideals in favour of the centre ground, and he is likely to continue in the same spirit today.

The Local decamped its entire editorial team to Gotland to report live on Sweden's festival of power politics this week and if you have been following our coverage you are probably well up to speed with the ins and outs of this exciting week. However, if you're new to the game, here's a guide to what Almedalen is and why the world should care. Don't forget to take part in the debate yourself on Twitter in English via the hashtag #AlmedalenENG.