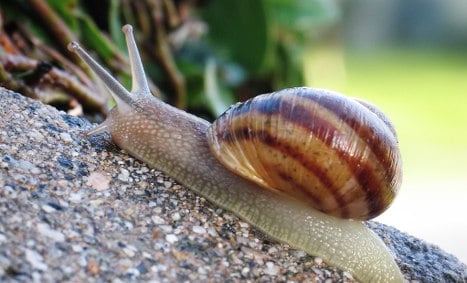 Snails are enjoying a bumper year at Swedish gardeners' expense. Photo: By macrophile on Flickr via Wikimedia Commons

This wet year looks set to be a record one for snails – and they will cause misery for hundreds of thousands of Swedish gardeners.

Until recently the Swedish summer has been a damp squib. Snails and slugs thrive when the weather is rainy and flower beds are regularly irrigated. They're most active at night or on cloudy days.

Snails and slugs enjoy eating many of the bedding plants and vegetables in our gardens. They eat holes in leaves and flowers, especially favouring low-growing, succulent growth.

But there is good news. Researchers have discovered a new method to kill the garden marauders. The hope is to create a new kind of trap that can catch several slugs simultaneously. But don't get your hopes up yet – the trap is still at the research and development stage.

“We’re trying to create a new kind of trap that can catch several slugs or snails simultaneously,” Abigail Walter at the Swedish University of Agricultural Sciences in Alnarp, told TT news agency.

“We have started in a laboratory environment, but hope to soon be able to test it out in real life too.”

The scientists have discovered a chemical that kills the snail and which attracts other snails. This means that it can accumulate large amounts of snails in one place.

“It is about identifying the chemical and using it to create a more effective trap. It could have been useful in a year like this,” said Walter.

However, in the absence of this ultimate snail deterrent, this wet Swedish summer has meant a busy year for sellers of existing traps and pesticides.

“The demand has increased significantly,” said Lars Nilsson, store manager at Blomsterlandet on Backaplan in Gothenburg.

“I have heard that there are manufacturers who cannot keep up with demand.”

Furthermore sales of muscovy ducks – one of the few animals that have an appetite for snails – have increased. One breeder in Halland sold nine of his ducks in just one hour.