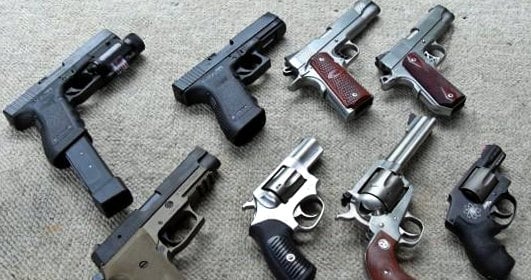 A selection of handguns unconnected to the article. Photo: Chris Browning/Gun News Daily

But after a weapons amnesty conducted in 2013, police established that a surprising number of illegal firearms were in circulation in Sweden.

Last year 115 firearms were seized by the Swedish customs authorities and it was revealed that large proportion of these had been bought over the internet from Slovakia, where the law regarding plugged – or deactivated – weapons has been slack until recently.

Plugged weapons qualify as legal in the country of purchase, and Swedish criminals with the correct tools are then able to reactivate them relatively simply.

However, Slovakia, pressured by the EU, has recently tightened its regulations for the possession and sale of plugged weapons. This means that they can no longer be sold over the internet.

Customs officials hope that the tightening of restrictions will lead to a reduction of firearms being brought into Sweden.

Southern Sweden in particular has been plagued by gang-related gun violence in recent months, especially in Malmö and Gothenburg, on the west coast.