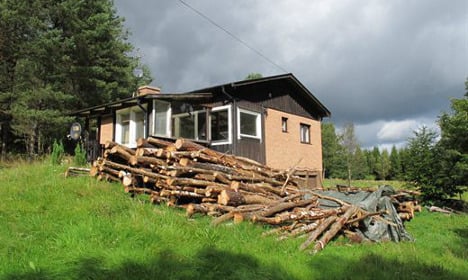 Given Sweden's infamous housing shortage, a two-room property in southern Sweden can often be snapped up within minutes.

But despite being a bargain at 422,000 kronor, this house, located near Laholm, has gone unsold for almost three years, prompting some Swedish media to suggest that the reason it has failed to attract any buyers is its genitals-themed address.

The home is located in the village of Snorrslida, which in Swedish translates to 'penis vagina'. You're right in guessing that it did not take much more than that for the advert to go viral in Sweden over the weekend.

“Whoa, slow down for a second. There's a place in Sweden called Snorrslida,” commented one Twitter user.

But estate agent Henrik Håkansson does not believe the name of the village is what has put off prospective house buyers.

“[The house] is in a bad condition, the difficulties selling it are not related to the name,” he told The Local on Monday.

His company Dansk Ejendoms Consult helps Danish buyers wishing to relocate to the other side of the Öresund strait to snap up their dream home in Sweden.

The two Nordic languages are similar and Swedes and Danes are often able to understand one another. But not all words are identical, and while Snorrslida can lead to both one or two misunderstandings in Swedish, the word would raise few eyebrows in Denmark.

“Danish people don't have this association with the name, it's only Swedes who know the alternative meaning and laugh about it, said Håkansson, who is still hopeful the Snorrslida property can become a home to someone in the near future.

“It's a very small area with not many customers, but we've sold this house before and we believe we can do it again. It was sold about ten years ago, and back then it was in the same condition as it is today.”

“Hopefully it can be sold next week, but it might also take half a year, we'll see.”

According to Annette Torensjö, place name expert at Lantmäteriet (the authority that maps Sweden's geography and properties), 'Snorr' used to be a common name in Viking times, and 'lida' means 'hill' in ancient Norse. Nothing to do with either penises or vaginas, then.

“It's in the eye of the beholder to determine if it is ugly and dirty,” she told public broadcaster SVT.

Snorrslida is not the first town in Sweden to have an unfortunate name. The village of Fjuckby caused a stir several years ago when its residents tried — in vain — to change its name.