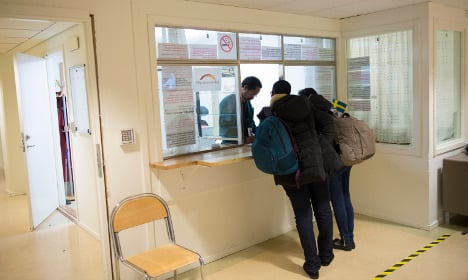 Refugees to Sweden face a long wait to have their passports checked. Photo: Maja Suslin/TT

The Swedish Migration Board's (Migrationsverket) ID department is responsible for going through all documentation handed in by asylum seekers to check for, for example, fake passports before their applications are processed.

But increased workload has caused paperwork to pile up at the authority.

In June at least 15,000 people – Syrians and those without passports – who applied for asylum back in 2014 were still waiting to have their documentation even looked at by the Migration Board's ID department.

“The waiting times are long, even for those cases that are not difficult to investigate. We can't write up a decision before we have had the go-ahead from the ID department telling us that their paperwork looks genuine,” one Migration Board case officer told Swedish newspaper Dagens Nyheter (DN).

“Many asylum seekers are frustrated. Without residency permits they can neither bring their relatives here nor start learning Swedish. They can't get their lives started, quite simply,” said the unnamed case officer.

Of the 60,000 identity documents sent to the department last year around six to seven percent turned out to be fake. And Jan Westmar, head of the ID department, told DN that the aim is to have all of last year's paperwork looked at by the end of September.

“Hopefully things will flow better this autumn,” he said.

The Local reported earlier this year on the long waiting times faced by asylum seekers in Sweden, which processes the most applications per capita in the European Union.

More than 80,000 refugees have arrived in the Nordic country in the past year, fleeing conflicts and poverty in places such as Syria and Eritrea.

Most of them will have to wait six months to have their case heard, Migration Board officers told Swedish Radio's news programme Ekot in May.

Fifteen thousand more asylum places are expected to be needed in the Nordic country this year. To cope with an increasing flow of refugees, the Migration Board announced in March that it has more than tripled the maximum number of residents allowed at each asylum centre in the nation from 200 to 650.