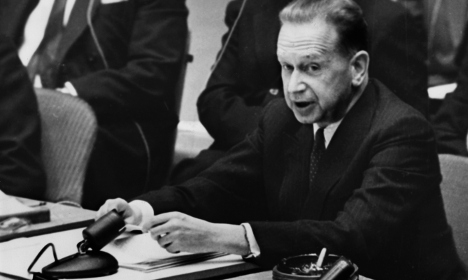 Ban said new information uncovered by a UN panel on the death of the former secretary-general should be probed to establish whether his plane was attacked just before it crashed in southern Africa.

After receiving the report, he said “a further inquiry or investigation would be necessary to finally establish the facts” surrounding the mysterious crash.

The panel “found new information, which it assessed as having moderate probative value, sufficient to further pursue aerial attack or other interference as a hypothesis of the possible cause of the crash,” said UN spokesman Farhan Haq.

The answers may lie in classified documents from the United States and Britain that the panel was unable to consult, despite requests for access.

Ban said he would follow up on the requests.

The UN's second secretary-general, Hammarskjöld died when his plane crashed on September 17 or 18 of 1961 near Ndola, in Northern Rhodesia, now known as Zambia.

The 56-year-old Swedish diplomat was on his way to negotiate a ceasefire for mining-rich Katanga province in what was then Zaire, which had proclaimed independence from Belgium.

The three-person panel spoke to witnesses in Zambia who testified that there was more than one aircraft in the air when the plane made its approach to Ndola, or that the plane was on fire before it hit the ground.

These accounts seemed to corroborate information contained in a 2013 report by a separate commission that concluded that there was “convincing evidence” that the plane was shot down as it prepared to land. The wreckage of the plane crash that killed Dag Hammarskjöld. Photo: UPI/SCANPIX

A former US air force security officer, Paul Abram, told the panel that he heard transmissions about the shooting down of an aircraft near Congo while serving at a National Security Agency (NSA) listening post in Greece.

The panel said it could not authenticate Abram's claims.

The US government wrote in a letter to the panel last month that a search had not revealed any documents on radio transmissions but added that other files classified as top secret from the NSA would not be released.

Among the new information uncovered by the panel was a declassified report from a senior British diplomat to a secret service agent, Neil Ritchie, who details how he helped Katanga leader Moise Tshombe travel to Ndola for his meeting with Hammarskjöld.

The report did not mention the possible crash, but “its existence and content serves as new information about the presence of the British intelligence agency in the area,” said the UN panel.

The British government responded last month in a letter to the panel that it would not be able to provide more information on the case due to security concerns.

The UN General Assembly in late December adopted a resolution, drafted by Sweden, that called for the new investigation to finally shed light on the top diplomat's death.