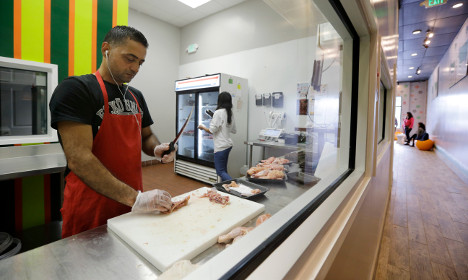 Sweden Democrat members in the small town of Heby in central Sweden want to issue a blanket ban on halal meat in local schools, claiming it is against Swedish animal protection laws.

And apparently because they also believe it will automatically convert those who eat it to Islam.

According to the local authority, meat produced through the traditional Islam halal method of butchering an animal is currently only being served to two pupils — who have both specifically requested it.

The Sala Allehanda journalist went on to ask Öhman if he meant to say that halal meat has magical powers, to which he replied: “Yes. This is precisely what we have warned of. They sneak halal in everywhere.”

His comments were immediately mocked by readers with many taking to social media to put the politician's knowledge of magic to the test.

“What happens if you mix halal and kosher meat?” wrote one Twitter user, referring to the traditional Jewish way of preparing food. “Which magic is the strongest?”

Traditional methods of halal butchering involve slaughtering animals by cutting their throats and killing them, without damaging their spinal cords. This takes place while butchers say Islamic prayers.

The practice is sometimes criticized by animal rights activists, but according to experts at the Swedish Board of Agriculture (Jordbruksverket) the method only presents a problem when it is carried out without stunning. In Sweden all animals are stunned prior to halal butchering.

“Swedish halal slaughter meets the same requirements as other slaughter [in Sweden]. We don't care about religion, only animal protection,” Shivar Magdal, veterinary inspector at the Board of Agriculture, told Sala Allehanda.

In his proposal to Heby Council, Sweden Democrat politician Öhman also claims that serving halal meat in schools goes against rules stating that all Swedish schools should not have religious affiliations. But this too is wrong, according to the Swedish School Inspectorate (Skolinspektionen).

“The school should be non-denominational, that is no confessions of faith or prayers. Eating halal meat is not a confession of faith,” School Inspectorate lawyer Sofia Wirlée told Sala Allehanda.

The Local has approached the Sweden Democrats' Heby branch, party press spokesman Henrik Vinge and Michael Öhman himself for comment.