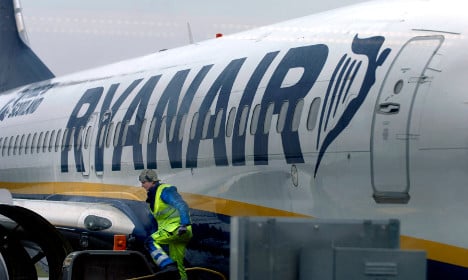 “It feels natural to be there for the Danish unions in an important conflict,” said Seko negotiations secretary Valle Karlsson in a statement on Wednesday.

The threatened strike is part of a long-running conflict over Danish labour unions' demand for collective agreements, which the low-cost Irish airline has thus far flatly declined to enter into negotiations on.

“It is unreasonable that employees should be forced to work for companies that lack collective agreements what with all it implies in terms of less job security and in the long term worse pensions,” said Karlsson.

Sympathy strike measures include a blockade of all work involving any Ryanair flights being redirected to Swedish airports from Copenhagen and Billund due to the conflict on the other side of the Öresund strait. This could include loading and offloading luggage.

“We support our Danish colleagues in their trade union fight for good working conditions at Ryanair,” said ST chairman Britta Lejon in a statement.

The Danish LO union has previously said it will also join the Services Union in the July 18th industrial action. Because an LO sympathy strike would bar other Danish unions including 3F, Dansk Metal and HK from doing work for Ryanair, it would make it nearly impossible for the airline to operate out of the Danish capital during the strike.

Welcoming around 25 million passengers every year, Copenhagen Airport is the main hub for travellers flying to or out of southern Sweden, which is connected to Denmark by the Öresund bridge. But Ryanair has previously warned it will abandon the base if the unions make good on their strike threat.

Its CEO Michael O'Leary hit back at unions at a press conference in Copenhagen on Tuesday in an attempt to refute what he called “complete rubbish” and “false claims” from the unions about the company's pay and conditions.

“We operate a very efficient, very productive system and our people work for us because they choose to work for us,” he told Danish TV2 just before the press conference. “They have high pay and job security, which SAS and Norwegian employees don't at the moment.”

Ryanair's entry into Copenhagen has been full of turbulence, with the airline and Danish labour unions in an ongoing war of words since Ryanair announced its intentions for a Copenhagen base in October 2014.