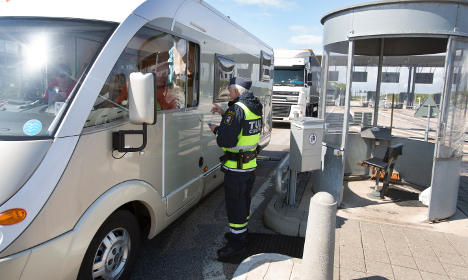 Violence in Sweden's third largest urban centre has escalated in the past two months, including shootings, explosions, hand grenades being thrown and cars and buildings set on fire.

On Friday night a man in his twenties was shot in the street in the nearby town of Arlöv and only yesterday a 25-year-old man ended up in hospital after being shot somewhere in Malmö.

Regional police in southern Sweden put the rising violence down to an increased import of illegal weapons and are calling for tougher border controls on the Öresund bridge between Sweden and Denmark in a bid to tackle the problem.

“What makes us notice criminality more is the amount of illegal weapons in the city. We seize far more weapons and we notice that they are much more accessible than before,” Mats Karlsson of the Malmö police told Danish newspaper Berlingske.

1,300 illegal weapons were seized in Sweden last year. This is an increase by some 100 firearms from 2013. A total of 71 of them were confiscated by customs officers at the Öresund Bridge, Malmö Central Station and Malmö International Airport.

So far this year officers in the Skåne region have seized 103 weapons, including everything from soft airguns to machine rifles.

According to Karlsson it is difficult to trace how the illegal weapons end up in Sweden, but most are believed to have come via the same route used by more than 30,000 commuters every day – the Öresund bridge between Copenhagen and Malmö.

“I would wish that it was easier to stop random cars than it is today, and that we more easily could have real checks in periods like this. I don't mean permanent border controls, but over a certain period, so that we knew that if something was on the way, we could stop everyone,” Karlsson said.

Some of Malmö's inner-city areas and suburbs have a reputation for gun and gang-related crimes as well as race-related violence between different immigrant groups.

“We are close to Denmark and thus close to the continent. Malmö is the doorway to Sweden for much criminality. Many new types of crimes are carried out in Malmö before they spread to the rest of Sweden,” said Karlsson.

But Gerd Battrup, researcher in cross-border police co-operation at the University of Southern Denmark, does not believe tougher border control is key to stemming the tide of violence. She instead advocates closer co-operation between Swedish and Danish police.

“The introduction of border controls on the Swedish side would be terrible for the thousands who commute across the border every day to work in Copenhagen,” she told Berlingske.