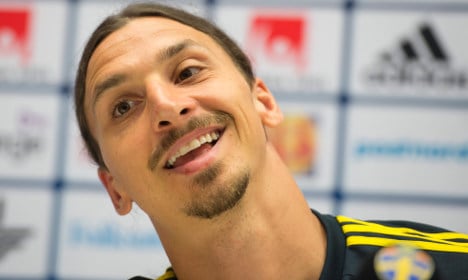 Fans were delighted to learn that top footballer Ibrahimovic, who currently lives in France, was paying a visit to his old home town in southern Sweden.

And judging by snaps published on the Paris Saint-Germain striker's Instagram account, the star himself was having a great time as he posed in front of some of the spots in Rosengård named after the footballer himself.

One of the world's highest-paid footballers, earning about 200 million kronor a year, Ibrahimovic's flashy lifestyle is a far cry from his upbringing in Rosengård.

The suburb mainly hits the news over its race-related violence, recently prompting Swedish police to step up their presence in the area.

But the striker has always spoken highly of the area, famously saying, “You can take the boy out of Rosengård, but you can never take Rosengård out of the boy”.

The love goes both ways, with many places in the suburb referencing the Swedish footballer, including the football pitch 'Zlatan Court', which opened in 2007.

It is not known where Ibrahimovic is staying during his visit to Malmö, since it was recently revealed he had sold his luxury mansion to Swedish NHL ice hockey player Carl Söderberg.

On Thursday and Friday, many Italian fans commented on the star's Instagram account, saying “Please come back to Italy,” giving fuel to rumours the striker may be eyeing a return to AC Milan.

However, the 33-year-old himself has insisted he is happy at PSG and has no plans of moving any time soon.

“I have no idea where these stories are coming from,” he told a press conference last month.

In other news, Ibrahimovic recently announced he was releasing his own fragrance, following in the footsteps of footballers such as David Beckham and Christian Ronaldo.

“The brand has one foot in the perfume capital of Paris and the other in his native country Sweden,” said a press release announcing the new perfume.

He's also been in the headlines his month after former Oasis singer Noel Gallagher hit out at the Swedish forward in an interview with the Aftonbladet tabloid.