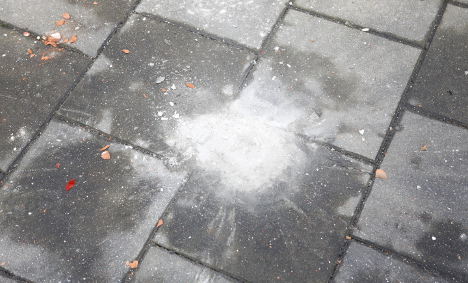 Signs of the explosion in Malmö: Photo: Drago Prvulovic / TT

No one was hurt in the blast, which took place just before 7am on Monday. But the explosion destroyed the door to a rented apartment in the building in the Augustenborg area of Malmö, in the south east of the city.

Police announced just before lunchtime on Monday that they had found parts of a hand grenade outside the block.
Officers also noted that the explosion happened on the same street where another explosive device was detonated in January, smashing several windows.
“We will push our resources as far as we can and see what this is about,” Lars Förstell, a spokesperson for police in Malmö told the TT news agency.
Forensic teams were understood to remain at the site of the blast on Monday afternoon.
Augustenborg has a reputation for street crime and borders Rosengård, one of the city's most troubled suburbs.
The latest blast in the area comes in the wake of a wave of violence in Malmö, Sweden's third largest city.
Over the past two months there have been a number of shootings, explosions and cars and buildings set on fire as well as other incidents involving hand grenades being thrown. Malmö also has a reputation for race-related violence between different immigrant groups.
Regional police have put the rising violence down to an increased import of illegal weapons and last week called for tougher border controls on the Öresund bridge between Sweden and Denmark in a bid to tackle the problem.
“What makes us notice criminality more is the amount of illegal weapons in the city. We seize far more weapons and we notice that they are much more accessible than before,” Mats Karlsson from Malmö police told Danish newspaper Berlingske.
Police also announced in June that they were stepping up their presence in known trouble-hit areas including Rosengård and Seved and said that around 30 people believed to be from criminal backgrounds were being tracked by officers.