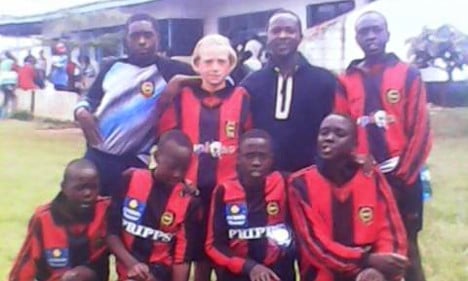 John Guidetti in Kenya, with coach Tiras Waiyaki (on his right) and fellow players. Photo: Private
While Zlatan Ibrahimovic is currently Sweden's only global football celebrity, the country's Under-21 side's win in the European Championship in Prague a fortnight ago suggests that the future looks bright for the Scandinavian nation.
And while Ibrahimovic has a reputation for making controversial comments and celebrating all things bling, John Guidetti — arguably the most likely next sporting icon to emerge from Sweden — could not be more different.
The former Manchester City player, who has just signed for Spanish club Celta de Vigo, spent part of his childhood in the Kenyan capital Nairobi, where his father was a teacher and charity worker.
Having begun his footballing career at IF Brommapojkarna, a youth club in Bromma, Stockholm, he joined the Impala Brommapojkarna at the age of 10, a team affiliated to the Swedish side but based in the city's biggest slum, Kibera.
“John naturally and most amazingly mingled with the boys from much poorer backgrounds with relative ease, leaving many in awe of the young lad,” his former coach Tiras Waiyaki told The Local on Monday.
“They say every football team has a clown. John was the team’s clown, often churning [out] rib cracking jokes that left us all in stitches. At times choosing to speak in broken Kikuyu (a local Kenyan language) it was all mad fun! He also used the pit latrines at the Olympic Stadium in Kibera with such calm and played barefoot when need arose.”
READ ALSO: Thousands welcome home Sweden's U21 heroes John Guidetti meeting fans in Stockholm earlier this month. Photo: Jessica Gow/TT
Guidetti himself has frequently spoken fondly of his experiences in Nairobi and while at Manchester City he formed The Guidetti Foundation, a charity aimed at helping talented people from all walks of life to achieve professional footballing success.
“That period was very important for my development, both on and off the pitch. I played football barefoot in the slum areas of Nairobi and I came into contact with local people and their culture. I still have a strong link with Kenya and every time I go back there I always get a warm welcome,” he was recently quoted as saying by footballing website Inside Futbol.

John Guidetti in Kenya, with coach Tiras Waiyaki (far right) and fellow players. Photo: Private
His kindness towards strangers has also scored him international headlines on home soil. Just last month he befriended an eight-year-old while he was visiting his parents' home in a Stockholm suburb.
The brave football fan ran up to the striker to ask him if they could kick a ball around together. Guidetti was in a hurry home to watch the Champions League final, but told the boy they could meet up after the match and kept his promise when the child returned with his friends and family.
“They came and knocked on the door after the match. There were maybe six of them, they had gone to get their cousins and everything. I brought a friend and then we played, the two of us against them. They thought it was loads of fun,” Guidetti told Swedish tabloid Aftonbladet.
“If I had been that age and some player you look up to had been there for you, I would have been over the moon. I'm sure I'll play with them more times (…) I think it's normal. Why wouldn't you do it?” he said.
READ ALSO: Swedish star's kickabout with fan goes viral
Guidetti is 23, but was allowed to play for Sweden's Under-21 side this summer because he was 21 in the year the team qualified for the tournament.
Tiras Waiyaki argues that his home nation could not ask for a better ambassador as it seeks to strengthen its main national team, with Guidetti playing a key role.
“His exposure especially here in Africa, at such a young age, where we have a sharing culture gives him an understanding of life that few of his age or older from Sweden or Europe have. This naturally makes him a good footballing ambassador for both Sweden and football,” he told The Local. John Guidetti playing in the U21 Euros final earlier this month. Photo: AP/TT
Although born in Sweden, Guidetti has a multicultural background. His paternal grandfather came from Italy and his great grandfather had Brazilian roots. While he has been linked to a number of Italian clubs, he is now set to spend the next part of his career playing for Celta de Vigo in Spain, a move Waiyaki says he's sure to embrace.
“He will take to the Spanish team an incredible personality so full of life, passion, talent, experience of different footballing cultures gained in various leagues and a deep sense of brotherhood attained from his time in Africa,” he said.
Always remember that at the back of his mind, John Guidetti plays for his ex-teammates and childhood friends in Africa's largest slum.”