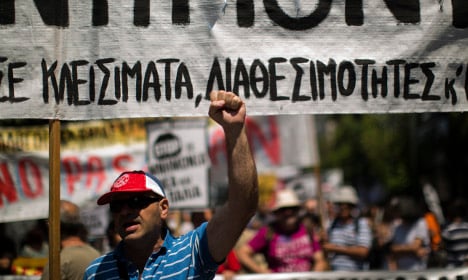 Anti-austerity protestors in Greece on Wednesday. Photo: TT
The latest chapter of the Greece crisis involves the EU working out which funds to use for its new financial aid programme for the troubled southern European country.
Eurozone leaders struck a deal in Brussels on Monday after an all-night negotiation to establish the preconditions for Greece being offered the package of between 82 and 86 billion euros over the next three years.
Fears emerged that Swedish taxpayers could be asked to provide funding for the new bailout on Wednesday after the EU said it planned to draw on an emergency fund that includes cash fron non-eurozone member states including Sweden, Denmark and the UK.
At a press conference, EU Commissioner Valdis Dombrovskis said that using money from the European Financial Stabilisation Mechanism (EFSM) was the “best possible way” to help tackle Greece's acute financial needs.
He said that he aware there were “serious concerns” among non-eurozone countries about the idea.
EFSM is a fund contributed to by all 28 EU member states, but in 2012 countries agreed that it would no longer be used to bail out struggling countries in the eurozone, with an alternative fund called the European Stability Mechanism (ESM) created instead, drawing only on the resources of countries using the single currency.
READ ALSO: EU agrees roadmap to Greece bailout
But Sweden's Finance Minister Magdalena Andersson told the TT news agency on Wednesday that her country's concerns about the EFSM being used were being listened to.
“The proposal now being discussed is quite different from the proposal that was up there yesterday. Certainly you should use the EFSM, but non eurozone countries should stand without risk,” she said.
Andersson said she was seeking a guarantee that EU countries that don't use the single currency would not have to pay out if Greece misbehaves over its scheduled repayments. Dutch Finance Minister Jeroen Dijsselbloem, centre, speaks with Swedish Finance Minister Magdalena Andersson, right, in Brussels this week. Photo: Virginia Mayo/TT
Earlier on Wednesday the UK also said it opposed non-eurozone contributions to the ESFM being used to help Greece.
“We’ve been clear we do not think British taxpayers should be providing funding for the eurozone,” a spokesperson for British Prime Minister David Cameron told The Guardian newspaper.
And Denmark’s finance minister, told other European finance ministers last week that non-eurozone countries did not support the idea.
“At the meeting, Osborne from the UK, Magdalena Andersson from Sweden and I expressed our scepticism over this plan,” Frederiksen told Danish newspaper Berlingske Nyhedsbureau. Will Swedish kronor be used to help Greece? Photo: Jessica Gow/TT
DON'T MISS: The Local Germany explains the latest twists in the Greece crisis
Greece has been asked repay seven billion euros of debts in July after accepting its third bailout programme since 2010 following Monday's intense talks in Brussels.

In Athens there were emotional scenes in parliament on Wednesday as Prime Minister Alexis Tsipras began the first day of debating and votes to get laws demanded by the creditors through.

Of the far-left Syriza party's central committee, 108 members rejected the new deal with the other eurozone countries – although since not all of them are MPs, Tsipras may still retain enough support with his party and other parties' combined strength to get the measures passed.

Public sector workers called a nationwide strike and launched new marches through the streets of the Greek capital.