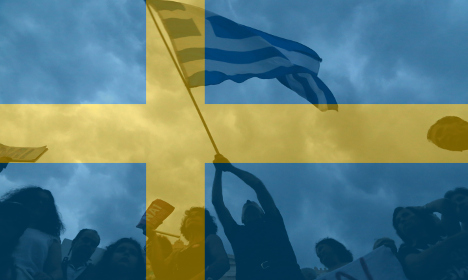 Are Sweden and Greece more similar than you think? Photo: imagebank.sweden.se and AP Photo/Petros Karadjias

Greece's former finance minister Yanis Varoufakis, who stepped down ahead of the peak of negotiations in Brussels this week, sparked plenty of media attention in Sweden when he criticized his European counterparts, saying that whenever he tried to question the economic polices thrust upon Greece, he was met with blank stares.

“It is as if you haven't spoken. You might as well have sung the Swedish national anthem — you'd have got the same reply,” he told UK-based magazine the New Statesman.

It seemed like a throwaway comment. But after thorough investigation (read: a few quick internet searches) The Local has discovered that there may actually be more truth to his analogy than meets the eye. Here are five surprising things the Swedish national anthem and the Greece debt crisis have in common.

1. Nobody knows what they mean

Statistical credibility, bridge financing, bailout, debt reprofiling, oxi, liquidity, bank recovery and resolution directive…hands up anyone who can explain more than three of those words. Anyone? The Greece crisis has been riddled with jargon, making it difficult for anyone who did not study economics at university to fully understand what the Hades is going on.

Not that different from the lyrics to the Swedish national anthem, in other words. Just for kicks: ask a Swede to explain what the line “you are enthroned upon memories of great olden days” (“du tronar på minnen från fornstora dagar”) actually means and watch as they fail to remember their fourth-grade history lessons.

Check out the look of panic on football players' faces as they awkwardly lip-sync along when organizers chose to play the second verse before a match. Usually only the first verse is sung so a lot of Swedes don't know the lyrics to the rest of the song.

2. People make up their own interpretations

The most famous one is football star Zlatan Ibrahimovic's spoken adaptation of the anthem for a Volvo commercial which went viral when it was published online.

In similar spirit, the Greece crisis has given rise to a plethora of internet memes and social media spoofs. Here are some of The Local's favourites:

ATMs in Greece are now offering other services as they run out of cash. pic.twitter.com/qd2aI7VmOG

i remember saving this meme two years ago cause i thought it was funny…. it still holds #notASfunnynow #greece pic.twitter.com/OqHjxvAscO

3. They've been around for ages

Although it's only been dominating global headlines for a few months, the latest Greece crisis has been unravelling since late 2009, with many economists believing decades of bad financial decisions paved the way for the country's current crisis.

Similarly, the Swedish national anthem has been around for a long, long time. It was written by Richard Dübeck in 1844, but really only started winning recognition as a patriotic song at the turn of the next century. The story goes that when King Oscar II heard it being played in 1893 he rose to his feet and that was that, as they say.

4. They both divide opinions

The Greece crisis is without doubt one of the most divisive news items to hit the global media cycle since Brad Pitt divorced Jennifer Aniston for Angelina Jolie back in 2005. Yes we know this is a superficial example, but hey we're trying to divert you from all that dull jargon we mentioned earlier.

Anyway, forget those guys, the question now is are you Team Tsipras or Team Merkel? The question could break apart entire families. It's already claimed a number of scalps, including former Greek finance minister Yanis Varoufakis. Prime Minister Alexis Tsipras himself faces a tough battle as he attempts to push new legislation through the Greek parliament in order to begin negotiations for a third financial aid programme.

Though perhaps not quite as controversial, the Swedish national anthem has also seen its fair share of heated arguments. One of the biggest ones is its lack of any kind of formal recognition. Every now and again a new party tries to push a proposal through parliament to give the song legal official status – every time it is rejected. The debate is largely academic anyway – most Swedes are in fact not too bothered as the song already enjoys unofficial status as the tune of choice at national events. 5. They both hark back to ancient times

Richard Dübeck's lyrics were written when Sweden was still in a union with its neighbour Norway and they are meant to evoke a feeling of pan-Scandinavianism rather than patriotic pride. They also reminisce about the times when Sweden was a great power back in the 17th century (“when honoured your name flew across the earth”) and celebrate its ancient nature (“you old, you free, you mountainous north”).

Similarly, there have been very few mentions of the Greece crisis in recent months without at least one reference to ancient Greek tragedies, the ruins of Athens, the Delphic oracle, Odysseus, Socrates, democracy or various Eureka moments, including headlines such as “Ancient Greece's answers to the financial crisis” or “The Greek debt drama in seven acts”. So contrary to what we said earlier about studying economics at university, perhaps you should instead have picked classics after all.

Finally, here are the lyrics to the Swedish national anthem, if you want to start practising for the next round of negotiations in Brussels.

English translation: You old, you free, you mountainous north // You quiet, you joyful and fair // I greet you, most beautiful land upon earth // Your sun, your sky, your meadows green. // You art enthroned upon memories of great olden days // When honoured your name flew across the earth // I know that you are and will remain what you were // Yes, I want to live, I want to die in the North.