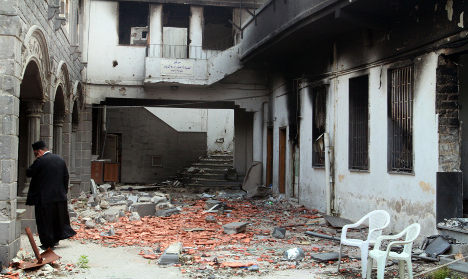 The Syrian city of Homs where looting has been rife. Photo: AP/TT
Isis — also known as Islamic State and IS — already has a reputation for funding its activities by trading stolen goods and although Sweden is not thought to be a key hotbed for art and antiques sourced in the Middle East, police say they have growing concerns about the problem.
“There are indications that objects IS stole in Syria are in Sweden, and we have received tips that should be followed up,” police superintendent Kenneth Mandergrehn told  Swedish newswire TT on Wednesday.
“We are not the biggest market for stolen items if you look at other countries in Europe or North America, but we must expect that they will show up here,” he said, adding that “precious metals that are thousands of years old” were among some of the expensive items making their way to Scandinavia.
Mandergrehn explained that Swedish police planned to set up a new national task force to investigate the trade of stolen cultural artifacts in Sweden as the war in Syria continues. The move comes amid evidence that growing numbers of Swedes are fighting alongside Isis and travelling between the two countries.
“To sell stolen artifacts is a meal ticket for IS,” he added.
“This type of crime has not previously been prioritized and the group will work at a national level,” he said. Recruitment for the task force is scheduled to begin in August.
Magnus Ranstorp, a terrorism researcher at the Swedish National Defence College confirmed to TT that Syria had been hit hard by looting over the past few years.
“It is about selling oil, confiscating the resources of the cities they take over… selling various art objects and antiques which they plunder,” he said of Isis' activities in the Middle East.
Mandergrehn added: “I would say that the theft of cultural goods is a big problem, and it can involve churches and homesteads being rid of items that may not have a purely economic  value, but which have a great historical value. It is about our heritage.”
READ ALSO: Are most dangerous Isis leaders Scandinavian?
At least 150 Swedish residents are known to have gone to Syria or Iraq to fight for Isis or other extremist groups, according to Sweden's security service Säpo, with intelligence suggesting that at least 35 have been killed.
More than 215,000 people have died in Syria's four-year war, which is increasingly dominated by violent jihadist groups such as Isis, who want to rid the country of western influence and build a state based on radical Islamist ideology.
Last month Sweden's government said it was considering drafting new legislation that would ban its nationals from fighting in armed conflicts for terrorist organizations such as Isis.
“It is completely unacceptable that Swedish citizens are travelling to [join] IS, financing the organization, or fighting for it,” Justice Minister Morgan Johansson and Home Affairs Minister Anders Ygeman wrote in a joint article in the Dagens Nyheter newspaper.
“We have a responsibility for what our citizens do both here at home and in other countries,” they added.