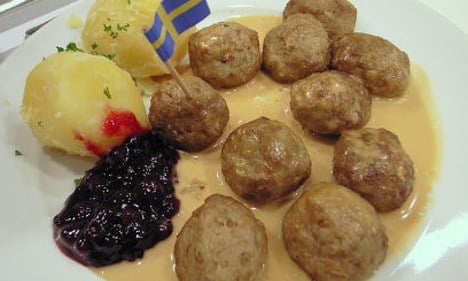 No vegetables are normally served with Ikea's traditional Swedish meatballs. Photo: Yoppy/Flickr
Swedish meatballs with mashed potatoes, brown sauce and lingonberry jam has long been the top selling meal at Ikea's 361 stores worldwide.
Vegetables are rarely served alongside the dish when eaten in Swedish homes or restaurants, but in some Ikea locations side orders are available for an extra charge.
Until recently, Norway was one of those places and Ikea was sharply criticised by public health experts who argued that people should not have to fork out an extra nine Norwegian kroner ($1) in order to make their meal healthier.
Synnøve Grini, a spokesperson for the Norwegian Institute of Food Fisheries and Aquaculture research (Nofima) this week called on the furniture chain to drop the controversial vegetable charge.
“Norwegians eat too few vegetables, and it is a problem,” she told Norwegian newspaper Dagbladet. “Ikea should turn the tables and let customers pay extra for more meat, but have vegetables as a part of the dish.”
Dieting expert Jeanette Roede agreed.
“It’s in the best interest of public health if vegetables are served with the meal,” she told the newspaper. “Health shouldn’t be a ‘should I or shouldn’t I?’ choice.”
The Swedish furniture giant then announced it had decided to charge all meatball customers an additional fee and to include the vegetables in meatball dishes in all its Norwegian outlets.
“Meatballs is a dish we serve globally in all of our stores. It is more or less the same in all markets,” Ikea Norway’s communication director Jan Christian Thommesen told Dagbladet.
“The meatballs are based on a traditional Swedish recipe and vegetables are normally not served with the dish.”
But he said that the company had decided to adapt the dish so that Norwegian customers can no longer opt out of the additional vegetables, in response to feedback that people would prefer to include the vitamin-packed produce.
“The change comes after a survey we did a while ago. We got a lot of feedback from our customers in Norway that they missed having vegetables with the meatballs and we have decided to listen to our customers,” he said.
“As a result, the dish will be 10 [Norwegian] kroner more expensive, which is currently the same price as a side order of vegetables.”
The extra, compulsory cost for the meatballs has however got some customers fuming on social media, with critics both slamming the company for forcing people to pay more to eat vegetables and for changing the famous Swedish recipe.
Daniela Rogosic, a spokesperson for Ikea, told The Local on Wednesday that there were no plans to give the firm's traditionally Swedish meatballs a global revamp.
She noted that Swedish stores already offered peas with the dish, which costs 39 Swedish kronor ($4.50) if you have 12 meatballs or 49 kronor ($5.74) for 16. Veggie balls have been on the menu since last month.
This is substantially cheaper than in Norway where the smallest portion of meatballs on offer costs 69 Norwegian kroner ($8.46).
READ ALSO: How to make your own Swedish meatballs