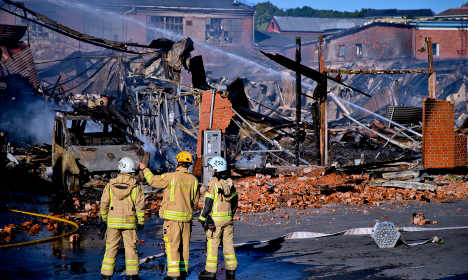 Around 40 firefighters battled the inferno for several hours after they were called out to the scene in western Sweden's biggest city at 2.30am.

“The fire is now under control,” Fire and Rescue officer Ingemar Waldenby told Swedish public broadcaster SVT at 6.30am.

The blaze is believed to have started after a number of cars were set on fire in the area, which then spread to the building at Backaplan in the Hisingen area of Gothenburg.

Police said later on Thursday morning that they had launched an investigation into serious arson, and had brought one person in for questioning.

“He is not suspected of anything at the moment,” police spokeswoman Ulla Brehm told regional tabloid GT, but added that when officers encountered the man in the area “there were circumstances that were connected to the incident”. One man has been brought in for questioning. Photo: Adam Ihse/TT

The fire started near premises owned by bedding furniture firm Sängjätten and quickly spread to the rest of the building occupied by ten other companies.

He urged residents in the area to keep their windows shut throughout the day as teams fight to control smoke which was still rising from the gutted building on Thursday morning. Cars had been set on fire earlier in the morning. Photo: Adam Ihse/TT

Gothenburg has experienced a number of violent incidents in the past year, including a several fatal shootings, although police said it was too early to investigate any links to the suspected arson attack.

The city has a long history of gang-related violence dating back to the early 1990s. Amir Rostami, a leading authority on Sweden's organized crime groups, who is based at Stockholm University told The Local in March that organized crime remained a persistant problem.
“Today, the gang environment is… I don't want to exactly call it the Wild West, but something in that direction,” he said.