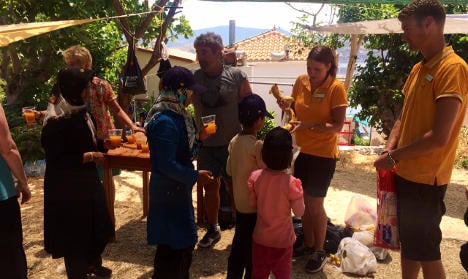 Ving staff handing out donated goods in Greece. Photo: Ving
Nordic tour operators including Ving and Spies have emailed thousands of customers scheduled to take charter flights operated by Thomas Cook Airlines Scandinavia from Stockholm's Arlanda Airport and Copenhagen Airport since June.
The tourists have been offered the chance to pack a box or unwanted bag weighing up to 20 kilos, containing clothes, blankets or toys they no longer need. The idea is that their donations will then be passed on to some of the thousands of migrants crossing the Mediterranean sea and arriving on the Greek islands of Kos and Lesvos, which are also hotspots for holidaymakers.
But on Thursday a spokesperson for Ving told The Local that only “less than 10 people” from Sweden had taken the opportunity to make a donation over the past six weeks, despite the firm sending out 1500 messages to Swedish passengers.
Earlier in the week Danish newspaper BT suggested that around 20 passengers flying out of Copenhagen had put extra bags on to Thomas Cook flights and Ving said that “about 20” other people had booked to take extra luggage to Lesbos on a flight leaving the Danish capital on Sunday.
“We would really like to help,” Magdalena Öhrn, Ving's press spokesperson said.
“We are just offering an opportunity to people and I am happy that 20 people have done it. Even a small help is a help,” she added.
But Öhrn told The Local she hoped that “many more people” would get involved in the coming months, with the initiative scheduled to run until at least September.
“We have the aeroplanes and other people have things they do not need any more, so it is a good thing,” she said.
Öhrn added that all donated bags would be thoroughly checked as usual to ensure there is no security risk to other passengers and said that customers' bags would be prioritized in the event of too much extra luggage filling the plane.
“If there are any problems the extra bags will just go on the next flight,” she explained.
Kos and Lesvos have been inundated with refugees from Syria and Afghanistan in recent months, with thousands of people making dangerous journeys across the Mediterranean in order to reach the European Union.
The move represents a major shift in migration patterns with almost as many migrants now choosing Greece instead of Italy as their entry point to the EU, despite Greece's acute economic problems.
UN figures released in June suggested that more than 39,000 refugees arrived in Greece by sea during the first six months of 2015, compared with 45,000 who reached Italy.