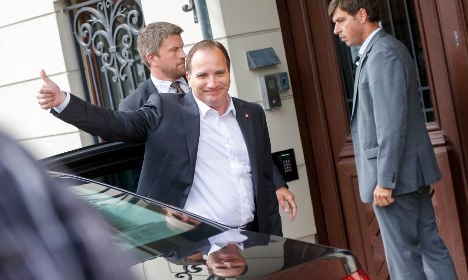 Stefan Löfven's press spokesperson confirmed the news that he had been hospitalised to Swedish tabloid Aftonbladet shortly after 10am.

Anne Ekberg initially explained that he had been experiencing acute nausea. But just two hours later she told the TT newswire that the Prime Minister had been discharged.

“He has been investigated and is now on his way home,” she said.

Ekberg explained that the Prime Minister had not become ill during his visit to Africa and had not left Ethiopia early as a result of his sickness. She said that he had only started to feel poorly once his government plane had landed in Stockholm.

Löfven, who heads Sweden's Social Democrat-Green coalition government, returned home at around 2pm on Thursday afternoon. He gave a quick thumbs-up to reporters as he walked through the doors of his official residence but did not speak.

According to the Embassy of Sweden in Addis Ababa's Facebook page, Stefan Löfven gave a speech at the third International Financing for Development Conference in Addis Ababa on Tuesday, which was chaired by UN Secretary General Ban Ki Moon and Ethiopian Prime Minister Hailemariam Desalegn.

He focused on the need to crack down on illicit financing in Africa, how women “are key to sustainable growth” and the importance of taking steps towards a green economy.

Malit Woruk, a receptionist at the embassy, told The Local that she had recieved a number of calls from Swedish journalists seeking information about the Prime Minister's health during his stay in Ethiopia but was unable to comment.
“We have had three, four, then five calls all within one hour. I did not see him and I cannot give any further information,” she said.

Posted by Embassy of Sweden, Addis Ababa on Tuesday, 14 July 2015

Stefan Löfven, who turns 58 next week, is not known to have a history of nausea.

A former welder, he has been at the helm of the Nordic nation since Sweden's last general election in September 2014. He has led the Social Democrat party since 2012 having previously been head of one of the country's most powerful unions, IF Metall.