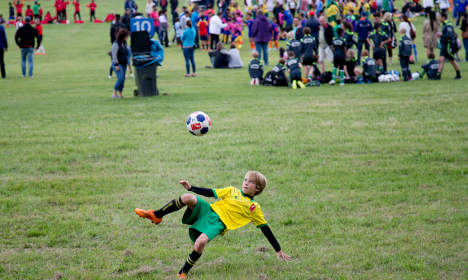 The Gothia Cup attracts 1,650 teams from all over the world. Photo: Adam Ihse/TT

Thousands of youngsters from all over the world travel to Gothenburg in western Sweden to compete in the Gothia Cup every year. And on Wednesday it was time for Bollnäs P12 and a team led by British De La Salle Academy staff to show off their skills on the pitch.

But for the 12-year-old Swedish footballers the match turned into a nightmare. The referee was forced to intervene after a group of parents from the Liverpool-based team acted in an aggressive way, hurling insults and profanities at the youngsters.

“They ran on to the pitch and threatened our players. The mood was incredibly vicious,” Andreas Hansemon, who coaches one of the other Bollnäs teams and was present during the match, told The Local on Thursday.

The young referee was forced to call for back-up during the second half. When the match ended there were five referees present on the pitch, including a Fifa inspector.

“I feel sorry for both teams. No team should have to play in such conditions. You have to be able to restrain yourself as a parent – at one point there were around six or seven parents on the pitch,” said Hansemon.

The De La Salle Academy is a Catholic secondary school for boys aged 11 to 18. One of its former pupils is England Premier League football player Wayne Rooney.

The Gothia Cup football tournament, also known as The World Youth Cup, is organized by Gothenburg top flight club BK Häcken. Since its humble beginnings in 1975 with 275 participating teams, it has grown to become the largest youth soccer team in the world.

“It's of course sad when things like this happen. We reacted strongly to it and reprimanded the British team sharply, asking them to solve their problems. I want to underline that there was nothing wrong about the players and the team leaders' behaviour, but a group of parents behaved badly and yelled bad words,” Gothia Cup press officer Peter Kymmer told The Local and added that the Liverpool leader had been very regretful after the incident.

“This is one incident out of more than 4,000 matches played during the week. I understand that it gets media attention, but you have to put it into perspective as well,” he added.

De La Salle principal Catherine Flaherty replied to The Local's request for a comment on Friday, saying the team had come from another school in the Liverpool area.

“The academy does not condone the behaviour of these parents and is saddened that the incident has marred a very successful tournament for staff and students.”

In the end the Bollnäs P12 team lost the match after penalties. And Hansemon said that the incident has not scarred the Swedish youngsters.

“They've been thinking a lot about it because they're not used to the referee having to stop the match because parents are screaming at them. But they're tough kids, so they've taken it well,” he said.