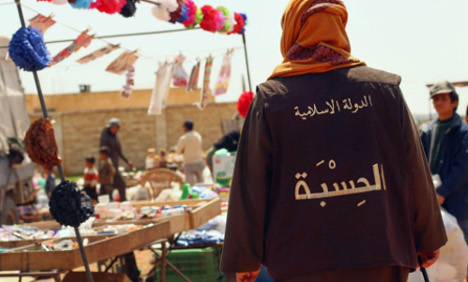 A woman in Raqqa, Syria, wearing a vest showing a pro-Isis slogan. Photo released in April 2015 by TT/AP

Women are increasingly leaving one of the safest countries in the world to work with extremist groups such as Isis (also known as the Islamic State) in Syria and the wider region, a spokesperson Säpo told Sveriges Radio programme Ekot on Friday.

Sweden’s Security Service has previously suggested that up to 300 people from Sweden are members of al-Qaeda groups and said that there are 150 confirmed cases of Swedes travelling to the Middle East to work alongside the extremists.

Now it has revealed that between 30 and 40 of those confirmed cases are women who are mostly “involved in logistics and support activities”.

In an email to Sveriges Radio, an unnamed spokesperson for Säpo told journalists that it was “serious and worrying” that women were “travelling to a war zone and joining violent Islamist groups” but it said it had not received any confirmation that they had been involved in any fighting or combat training.

The figures emerge following a number of high-profile cases of women and teenage girls appearing to flee Sweden to join Isis.

Last month Swedish media reported that a missing 15-year-old girl from southern Sweden had phoned her family to say she was in Homs in Syria. She is said to have told her parents that she was planning to join al-Nusra, an extremist Islamist group with links to al-Qaeda.

One of the most well known cases involves a Swede known as Faten Umm Fida, who was married to the British jihadist Ibrahim al-Mazwagi. They had a child before he died in battle in 2013, and according to Magnus Ranstorp from the Swedish Defence University, she is now very active in recruiting other Swedish women from her base in Manbij in Syria.

In May, Ranstorp told The Local that while some women and teenagers were clearly being persuaded or forced to travel to the Middle East by friends and family members, others “look up to the fighters like pop stars” and leave home of their own accord.