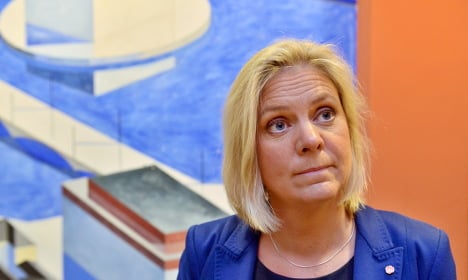 Sweden's Parliamentary Committee on EU Affairs met on Friday and agreed that Sweden would not oppose using EU money to help fund a new financial aid programme for the troubled southern European country. All parties voted in favour apart from the Left Party and the Sweden Democrats.

There had been fears that Swedish taxpayers could be asked to provide funding for the bailout after the EU said it planned to draw on an emergency fund that includes cash from non-eurozone member states including Sweden, Denmark and the UK.

But Sweden's Social Democrat Finance Minister Magdalena Andersson insisted on Friday that she had received assurances Sweden would not be forced to foot the bill, saying: “we are not risking Swedish taxpayers’ money so we are able to agree to the loan.”

Andersson, however, suggested that she’d had to fight Sweden’s corner when dealing with the European Commission and eurozone countries.

“There has always been a possibility that Swedish taxpayers might have to contribute but we protested and have been assured that Swedes’ money will not be at risk,” she told TT.

Indeed all non-euro countries have been told that that they will not suffer if Greece is unable to repay the emergency loan.

DON'T MISS: The Local Germany explains the latest twists in the Greece crisis

Eurozone leaders struck a deal in Brussels on Monday after an all-night negotiation to establish the preconditions for Greece being offered the package of between 82 and 86 billion euros over the next three years.

Earlier this week EU Commissioner Valdis Dombrovskis said that instead of utilising the European Stability Mechanism (ESM), a fund set up in 2012 using only the resources of eurozone countries to help struggling single currency countries, the European Financial Stabilisation Mechanism (EFSM) was the “best possible way” to help tackle Greece’s acute financial needs. Demonstrators protesting against the austerity policy of Germany prior to a special session of parliament on negotiations with Greece for a new bailout on Friday. Photo: TT

Greece has been asked repay seven billion euros of debts in July after accepting its third bailout programme since 2010 following Monday's intense talks in Brussels.

In Athens there were emotional scenes in parliament on Wednesday as Prime Minister Alexis Tsipras began the first day of debating and votes to get laws demanded by the creditors through.

Of the far-left Syriza party's central committee, 108 members rejected the new deal with the other eurozone countries – although since not all of them are MPs, Tsipras may still retain enough support with his party and other parties' combined strength to get the measures passed.

Public sector workers called a nationwide strike and launched new marches through the streets of the Greek capital.