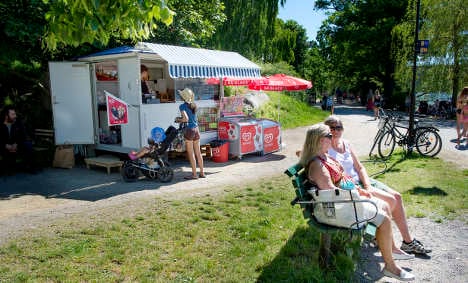 The hot weather of early July is a distant memory. Photo: Jessica Gow/TT

“Because of the warm period we had at the beginning of the month, the average daily temperature is a little higher than normal,” says Sofia Söderberg, a meteorologist at SMHI.

According to Söderberg, “the thing that makes you feel that the weather has not been so good is that it has rained almost every day – we’ve not had the sort of  continuous period of hot, dry weather that we associate with a warm summer.”

“This weather is typical of this time of year. A mix of sun and showers is not unusual for summer.”

But anyone hoping for a repeat of the record-breaking temperatures of last year, or even the dry spell at the beginning of July, is set for a disappointment. At least in the short-term.

“The weather will not really change very much for a while,” says Söderberg. “We will still have sun and showers and the temperature will stay more or less the same.”

You would be forgiven if you had a hard time believing that temperatures are higher than normal. Sweden has after all been beset by unsettled weather for most of the summer.

The country experienced the wettest May since 1962, according to meteorologists, with double the average amount of rainfall.

Even Midsummer celebrations were blighted by heavy rain in the south, although parts of the north remained dry and sunny.

And just this Tuesday, crowds turning out on Öland island to help the future queen, Crown Princess Victoria, celebrate her 38th birthday, had to brave torrential downpours.

And with the most recent forecast from SMHI, it seems that it's still not quite time to put those chunky sweaters away.