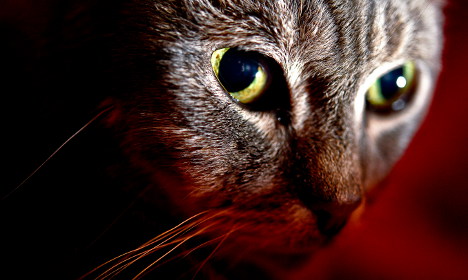 This is not the cat in the story. Photo: Anders Wiklund/SCANPIX

Distraught owners Elke and Jörgen Beierholm spoke of their heartbreak after their cat Rasmus was found drowned inside a well – killed in a heartless act of animal cruelty.

Although the pet went missing last month, the couple only chose to speak out about it on Friday after a veterinary examination revealed the cat's desperate fight for his life.

“His front paws were very chafed and they think it's because he was trying to climb out,” Elke told regional newspaper Ulricehamns Tidning (UT) and added the incident had been reported to the police.

“He would never have been able to get down there himself. How would that have happened? There's a solid stone lid on top of the well,” Elke told the tabloid GT.

The couple had gone looking for Rasmus when he failed to return to their home in Ulricehamn in central Sweden on June 11th.

The following morning Jörgen noticed that the rock they normally keep on top of the lid to the well in their garden – to keep it from being moved – was gone.

“We lifted the lid and looked inside with a torch. Then we found Rasmus lying there,” explained Jörgen, 77, to GT.

“I'm completely devastated. I keep picturing how he's fighting to get up,” said Elke, 70.

Sweden's total cat population is estimated to be more than a million.

But last month the country's reputation as an animal-friendly nation was put in a different light, after figures revealed that around one in ten of the furry creatures had been abandoned by their owners.

And Rasmus' tragic story quickly spread online in Sweden on Friday with the story trending on viral site Sociala Nyheter and many taking to social media to voice their disgust.

“That is horrible, I don't understand how people could be so cruel,” commented one GT reader on Facebook.

“Hope they find the people who did this,” wrote another.