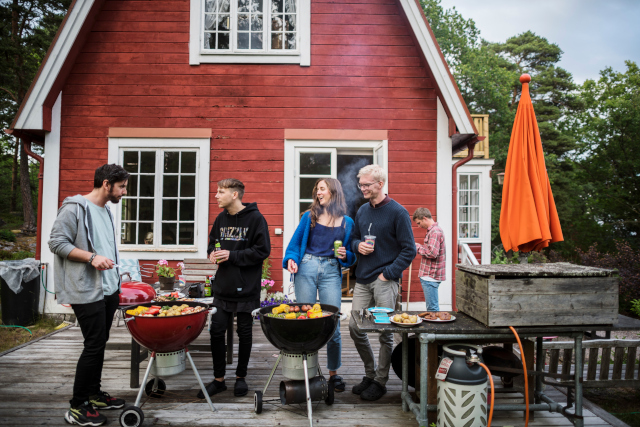 What are the dos and don'ts at a Swedish summer party? Photo: Vilhelm Stokstad/imagebank.sweden.se

The Swedes don't do late. If you say you'll be there at 7pm, be there at 7pm. Not at 7.20pm. In Sweden there is no such thing as fashionably late. People who are late are not trendy, they're just plain rude. It is their time you are wasting with your slovenly timekeeping, so get your act together – you might not get invited back. Do NOT be late. Photo: Torstein Bøe/NTB scanpix/TT
2. Clomp through the house or apartment showing off your new shoes
Take off your shoes! Take them off now! Swedes don't care if you have new Louboutins or Jeffrey Wests – they need to see your socks. You should practise this at home. When you walk in through the front door, always take your shoes off. It's summer so you're likely to be in and out of the house all day at the weekends.
You'll soon get the hang of it. It's really not the Swedes who are weird for insisting us Brits and Americans take off our shoes, it's us for thinking it's strange in the first place. You don't know what you've trodden in when you've been outside. Remember to take your shoes off. Photo: Gorm Kallestad/NTB scanpix/TT
3. Admit that you don't like strawberries

Swedes adore strawberries. Some Swedes even claim that Swedish strawberries are the best in the world. So declaring to a Swede that you're averse to these plump little nuggets of red summery loveliness is like saying to an Englishman that you don't like tea, or telling your children that kittens are evil. It's. Just. Not. Done. 4. Tell party guests that Allsång på Skansen is a celebration of cultural mediocrity

This summer staple (literally Singalong at Skansen) has been around since 1935 when around 50 people turned up to sing along with whoever was on stage. These days, up to 25,000 people are turned into karaoke zombies, singing along to ancient Swedish pop stars such as Sven-Bertil Taube who first had a hit in 1854, sorry 1954. What's worse is that this aural version of the colour beige is actually broadcast to the nation on SVT. And people watch it!

No no, this is not weird. Why would you think that? Photo: Fredrik Persson/TT
5. Help yourself to the booze in the kitchen
No, don't touch that bottle of wine! Stop! Everyone brings their own supply of alcohol to a party in Sweden. And, seeing as the state alcohol shops (Systembolaget) seem to open about three times a year, it's no great surprise that everyone monitors their own stash of alcohol with extreme vigilance.

Don't just help yourself to the booze. Photo: Gorm Kallestad/NTB scanpix/TT
6. Ask a Swede how much money they earn
You may as well ask them if their mother was a Dane and their father Norwegian. Do not broach the topic of salaries. Ever. That stuff is private and the Swedes take privacy very seriously. Even if they are drunk at a summer party. Don't get too personal – it will get awkward. Photo: Henrik Montgomery/TT
7. Say “Norway isn't that different to Sweden is it?”
It doesn't matter how similar you think Swedes and Norwegians are, there are vast, unbreachable chasms between them and their cultures. Honestly, the differences are huge. Firstly…er, I'll get back to you on that one.
8. Declare that Ikea produces inferior rubbish
Criticising Ikea in Sweden is like burning the stars and stripes in America. It is total taboo. Swedes' pride in the domestic goods retailer is unbreakable. Even if the furniture isn't. Remember to pay allegiance to Ikea. Photo: Fredrik Sandberg/TT
9. Make a gagging gesture when someone offers you a coffee
In Sweden coffee is life. Life is coffee. Even if you despise coffee buy a coffee maker. If you are to ever have Swedish friends it will get used. Often.
If you really can't bear to drink coffee, devise an outlandish excuse – “My brain explodes if it detects any caffeine.” No Swede will risk the stains to their furniture. What would Swedes do without their precious coffee? Photo: Henrik Montgomery/TT
10. Heckle the host
There is a quite amusing joke about Swedes' propensity for toasting and speechmaking. “A Frenchman, a Swede and a Norwegian were sentenced to death and the day before the execution they were granted their last wishes. The Frenchman asked for a three course meal followed by a cigar. The Swede asked for a dinner and also wanted to make a speech. The Norwegian's last wish was to be executed before the Swede began his speech.”
Some Swedish party hosts will absolutely insist on making a toast. Sometimes several. They might take quite a long time. The Swedish compulsion for public speaking at social gatherings is odd but very strong and you may feel a strong impulse to hurry things along with a few injudicious words. Resist that urge. Heckling will be punished by social exclusion.
READ ALSO: My Swedish habits that foreigners just don't get