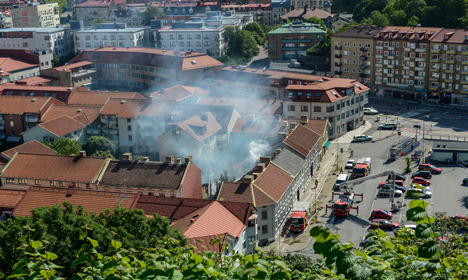 The fire started in a storage building in a courtyard. Photo: TT

The fire started in a storage building in the courtyard of an apartment building on Skolgatan, according to the emergency services department. The exact cause is still unknown, although police are classifying it as aggravated arson at this point.

The flames damaged the building’s façade but no people were injured. A number of residents had to be evacuated and parts of Skanstorget were closed off.

“Now we are working through the remains of the storage building that burned to make sure nothing there is still smouldering,” a spokesperson for the region's fire service, Annika Boberg told the TT news agency.